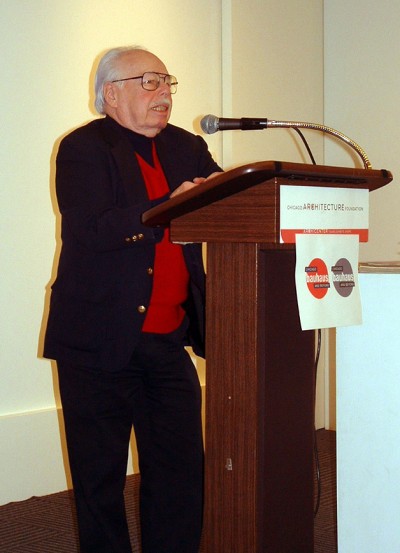 Allen Porter had an extensive career as designer, teacher, photographer and activist for the preservation of folk art environments and architecture. He met Laszlo Moholy-Nagy at the New Bauhaus while in high school and became exposed to the modern design movement for the first time; after his discharge from service in WW2, Porter entered the New Bauhaus/Institute of Design, expanding his interest in graphic/industrial design, architecture and photography. He moved to Los Angeles in 1950 and opened his first design office, serving architects, furniture and lighting designers, manufacturers, and showrooms; his practice grew to include a spectrum of industries in a range of design disciplines.

Returning to Chicago in 1969, Porter co-founded another design office and became a founding member of Chicago Bauhaus and Beyond, a nonprofit organization engaged in promoting preservation and education about mid-century architecture and design. He won numerous design awards, and his work has been exhibited and published worldwide. He has taught at California State College/Los Angeles, the University of Illinois/Chicago, and Columbia College/Chicago, and has lectured at many design and business conferences. His photography has been exhibited in galleries in New York and across the Midwest, and is included in the collections of the Art Institute of Chicago, the Davis Museum at Wellesley College, the Montclair Art Museum in New Jersey, and various private collectors. Porter passed away in 2020.