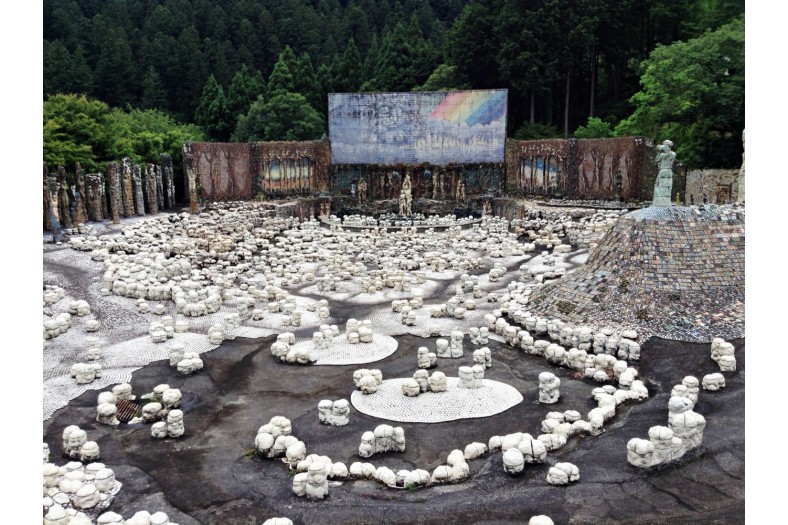 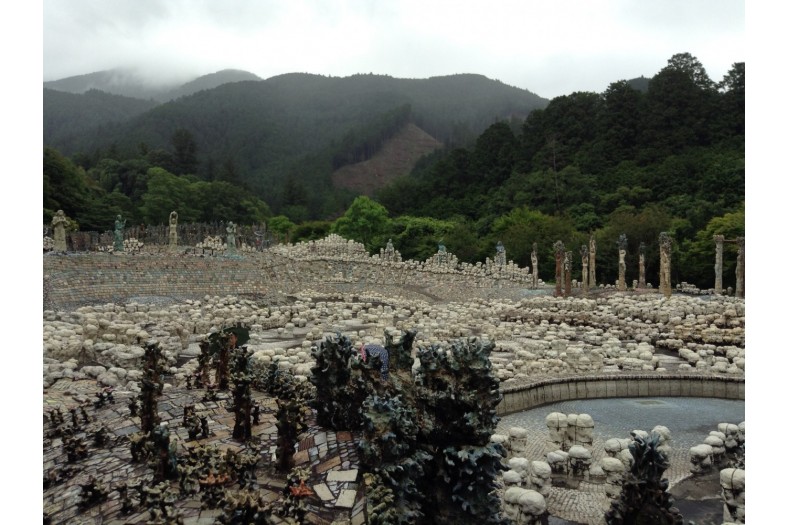 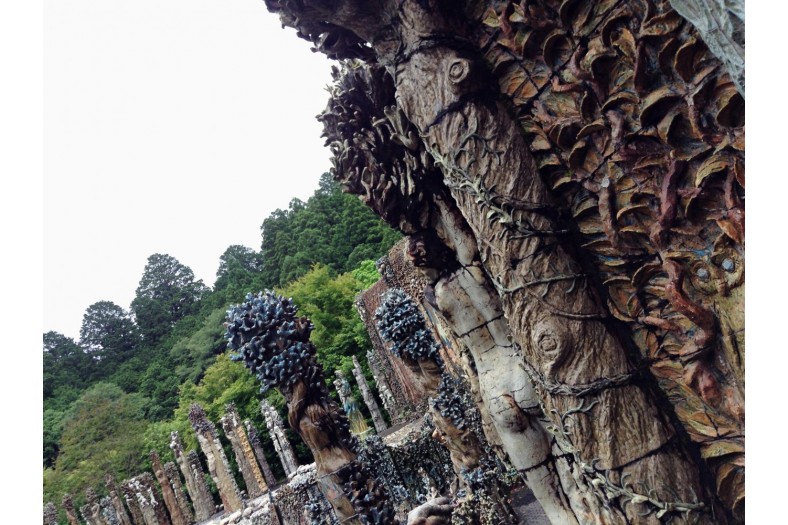 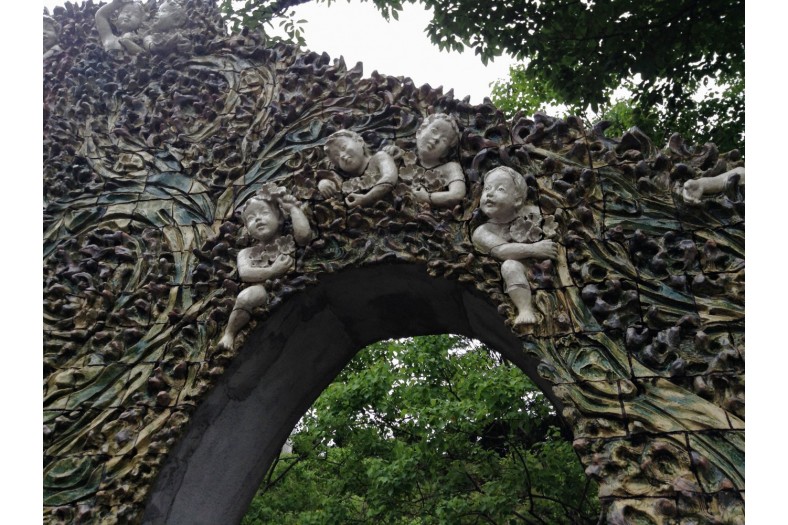 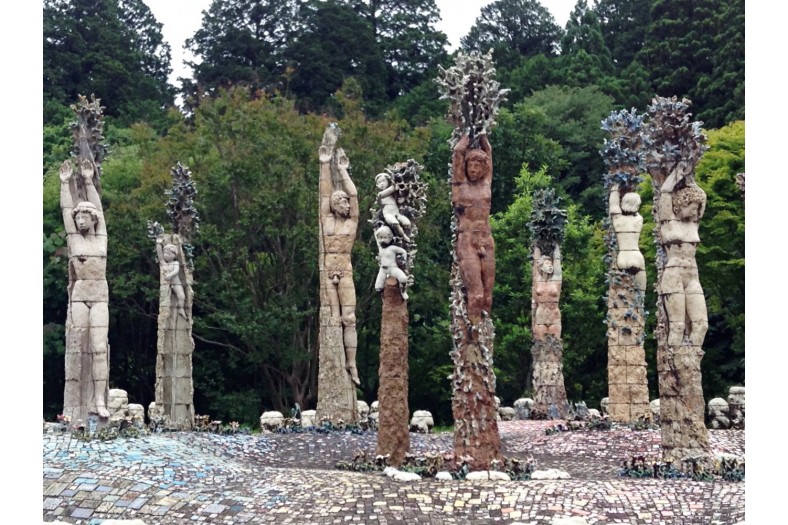 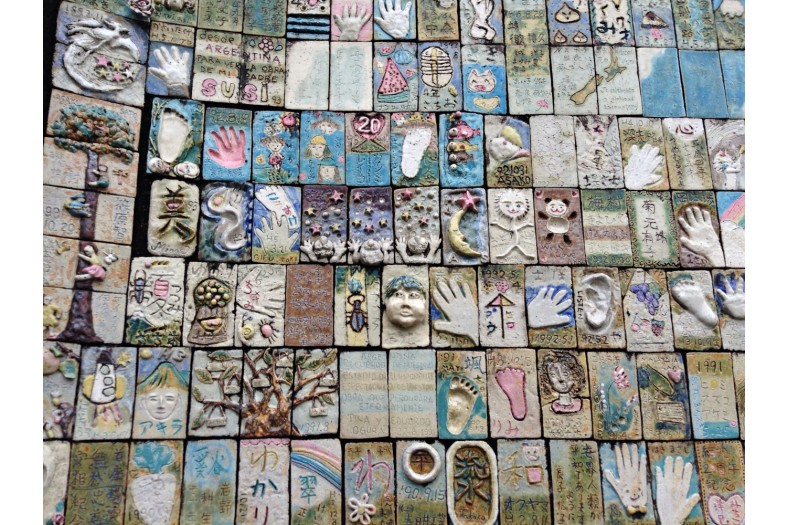 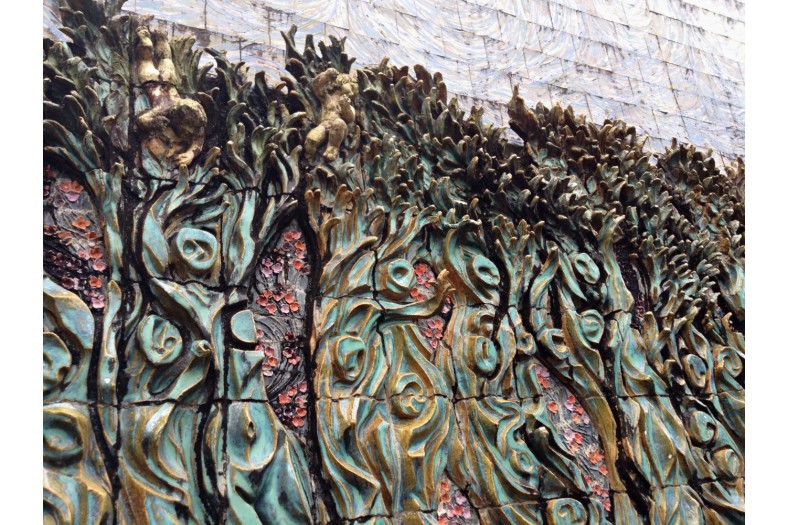 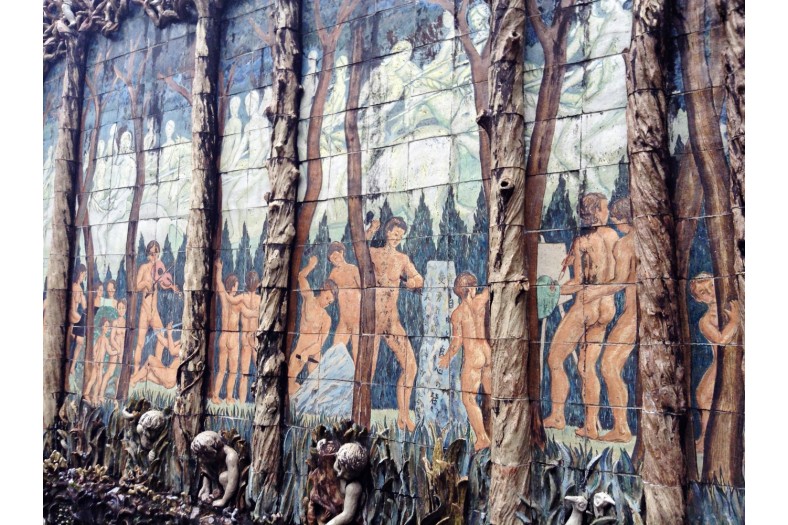 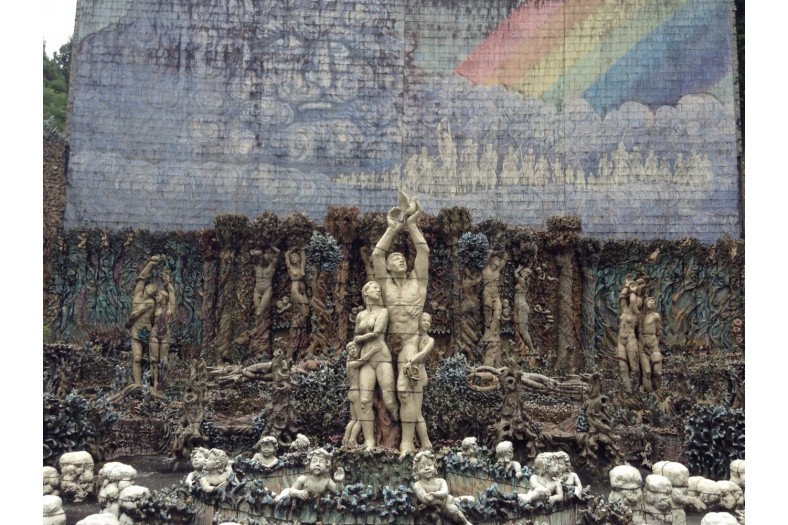 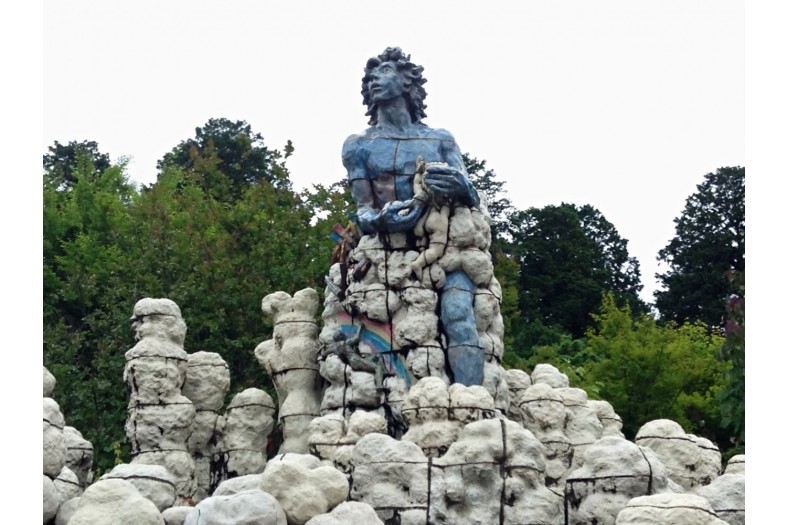 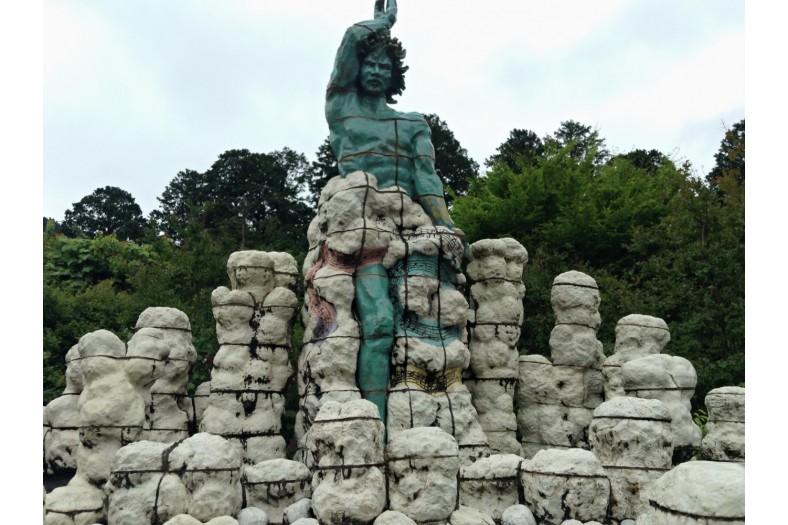 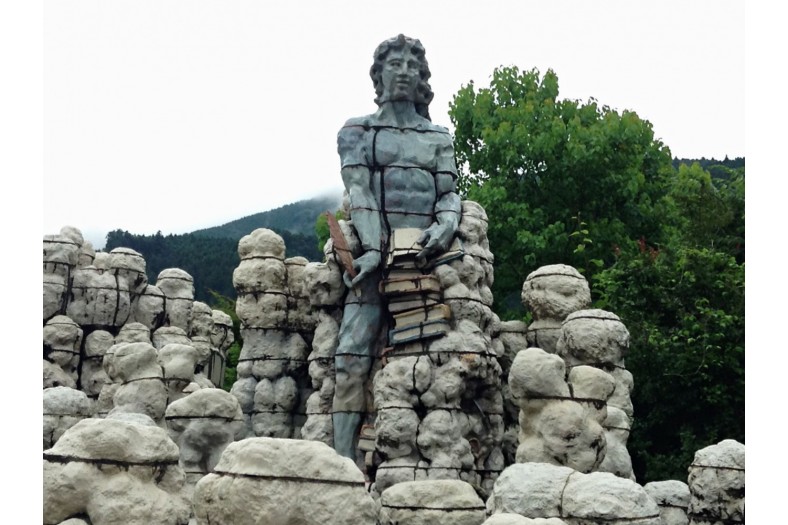 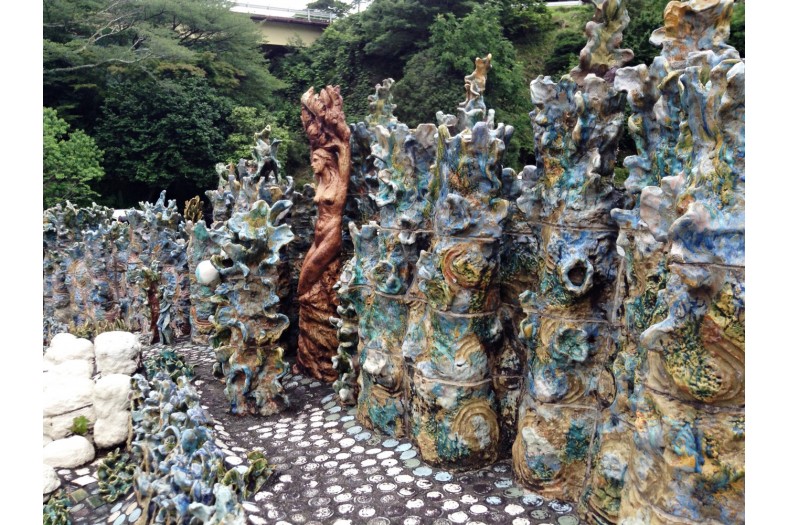 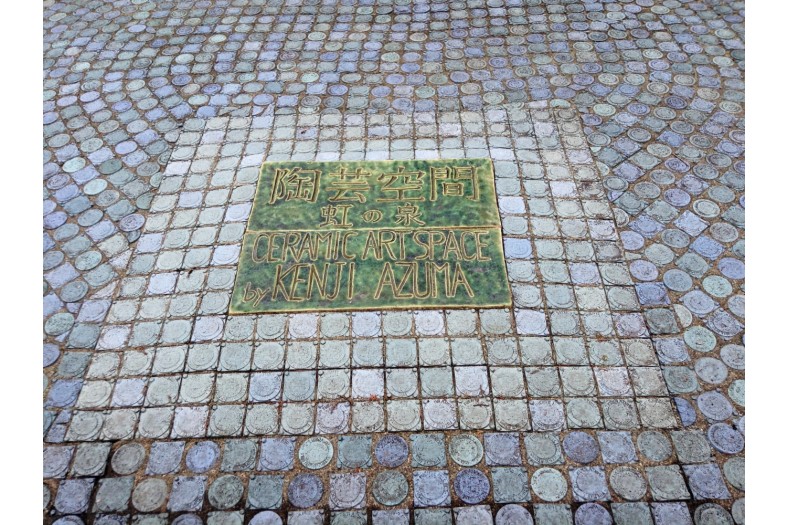 The site is open to visitors and only accessible by car. Admission is 500 JPY (3,68 US dollar).

Niji no izumi (The Rainbow Fountain) is an art environment located in the Mie prefecture about 250 km from Osaka, the second largest city in Japan. Ceramic artist Kenji Azuma (1938–2013) worked for 35 years to create this unique and magnificent 5,600 m² art environment.

Azuma was born in Mie, and he began painting and drawing in his childhood. Impressed by a ceramic artwork he saw in a school textbook (a red sake bottle) when he was a junior high school student, he decided to go to a ceramic arts school. After graduating from the school, Azuma was struggling with his career. Upon visiting the Ancient City of Sigiriya in Sri Lanka (a UNESCO World Heritage Site), he was inspired to create Niji no izumi.

He looked all over the world for an ideal space for his art environment – even in Argentina – and after 16 years, he found the ideal space. It was a spot near his hometown of Mie surrounded by hills and deep, green forests. At this spot in 1978, he finally started creating an art environment. He worked on it almost every day until he died in 2013.

The art environment that Azuma created over the years resembles an open-air theatre in a mountain village, not filled with spectators, but rather with an enormous number of artworks that fills the entire space. All creations are composed of intricately handmade ceramics with elaborate details. Some of the works seem similar; however, by looking closely, visitors can notice the differences. Walls full of decorations that rise in this space act as a kind of decor. These walls shape the art environment and characterise the several sections of the space, each section having a specific theme. The various sections, however, are connected by small statues, and in this way, a harmonious art environment is created. The atmosphere of the space is very peaceful and quiet, which allows the visitors to focus on the artwork. They can walk between the walls and enter the various sections. Walking around on the site, one can approach the large number of creations and see their magnificent details.

The spot where Azuma started his incredible project, the Rainbow Wall, is currently located on the back side of the space. Another section includes a group of three ensembles of sculptures that represent music, art, and literature. Each ensemble is crowned with a large  sculpture that personifies the theme. Looking at these sculptures, it seems that Azuma was influenced by Greek mythology. This idea is supported by the fact that one of the sections is named Wall of Iris, which is the name of a daughter of a god in Greek mythology.

These three groups of sculptures and another five sculptures of women stand on a hill covered by colourful ceramic pieces. In addition to that, there are statues of trees with blues and greens. In particular, those bright artworks make the space pleasant.

There is also a section with 53 sculptures covered by plants like ivy. This section is called Jinzoju no mori (the forest of human tree statues). Each sculpture has a different shape and shows a human taking a specific posture. Some of them represent children and others are adults. Some children look like they are playing on a tree. There is a section called the Wall of Iris where visitors could purchase raw clay and create their own work to add. The wall still stands but the project, unfortunately, has been discontinued.

Since Azuma's death in 2013, his wife has maintained and protected the site. She welcomes people from all over the world. To keep this place in good condition, the visitors are expected to pay 500 JPY (3,68 US dollar) to enter the environment. 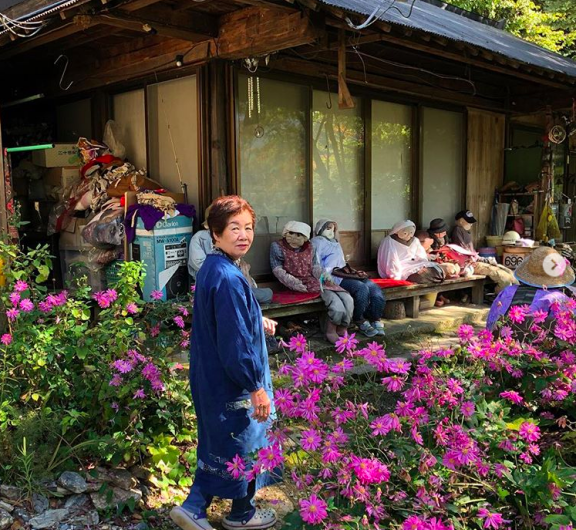