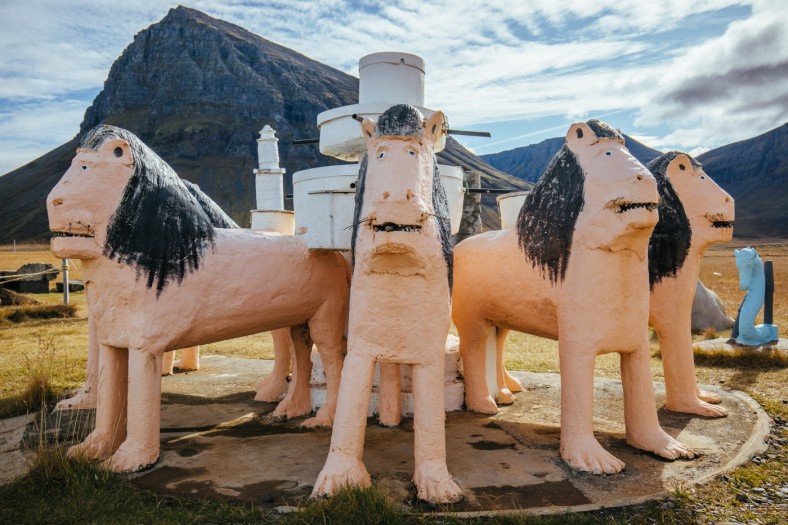 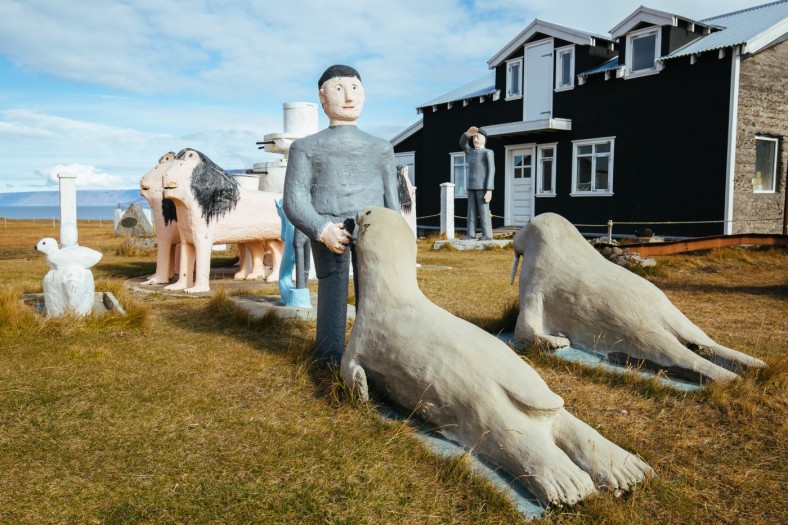 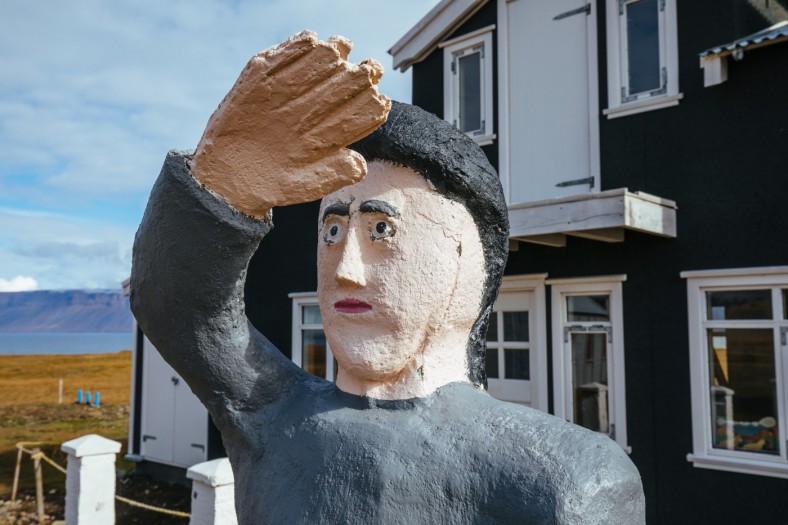 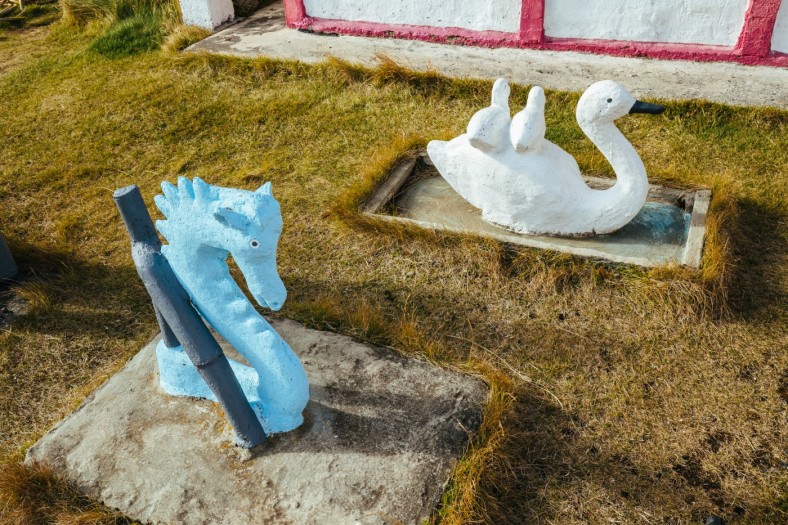 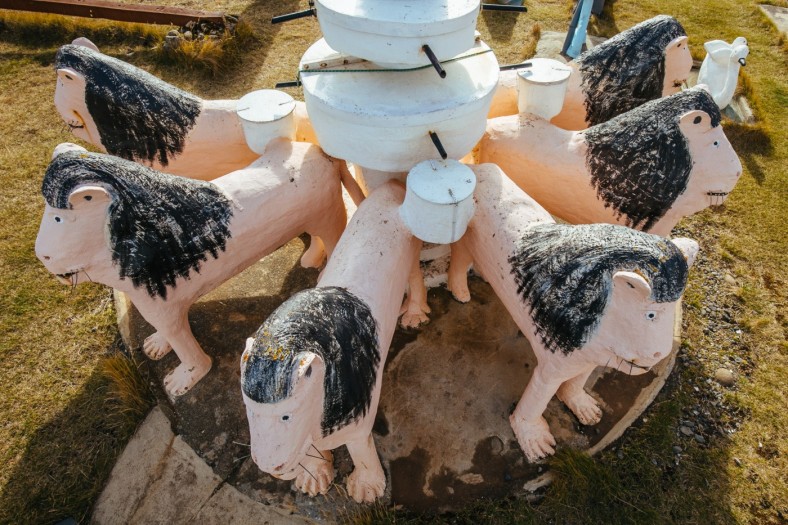 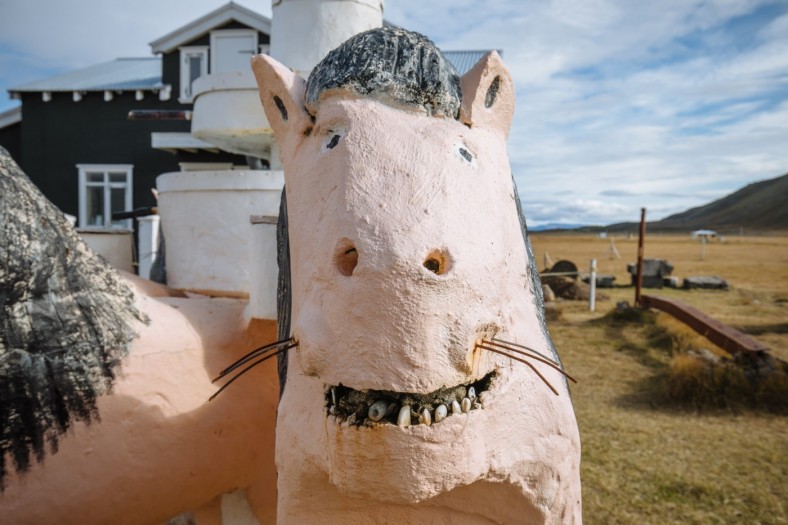 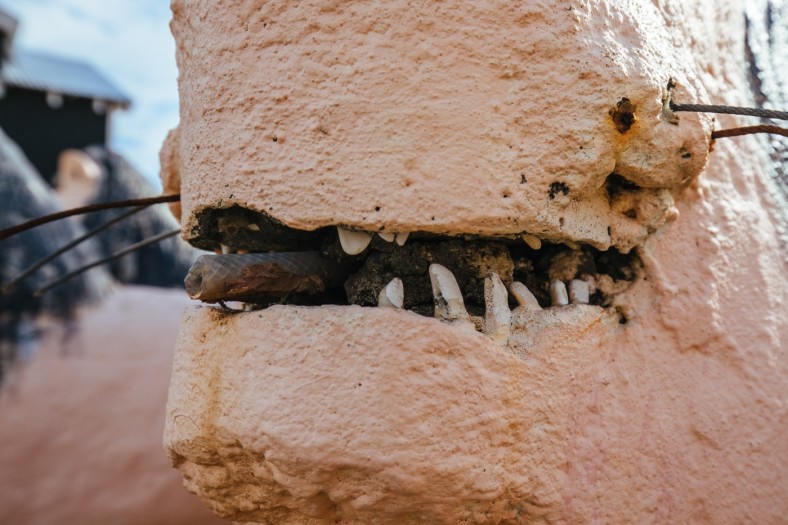 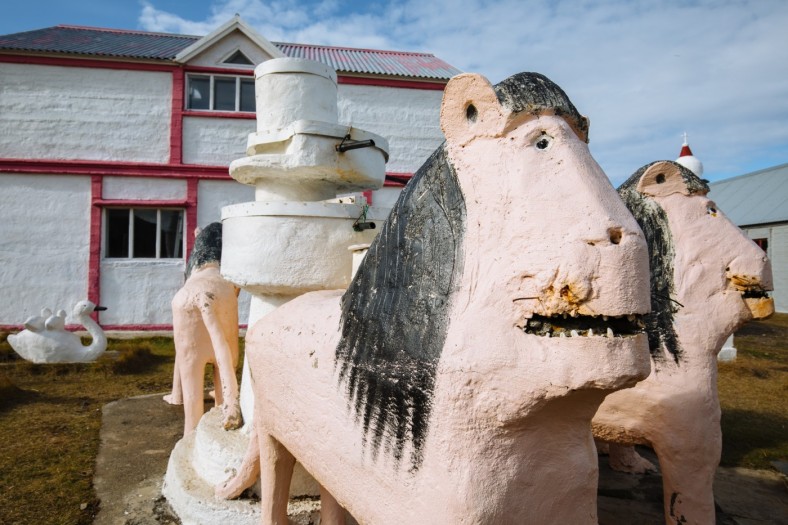 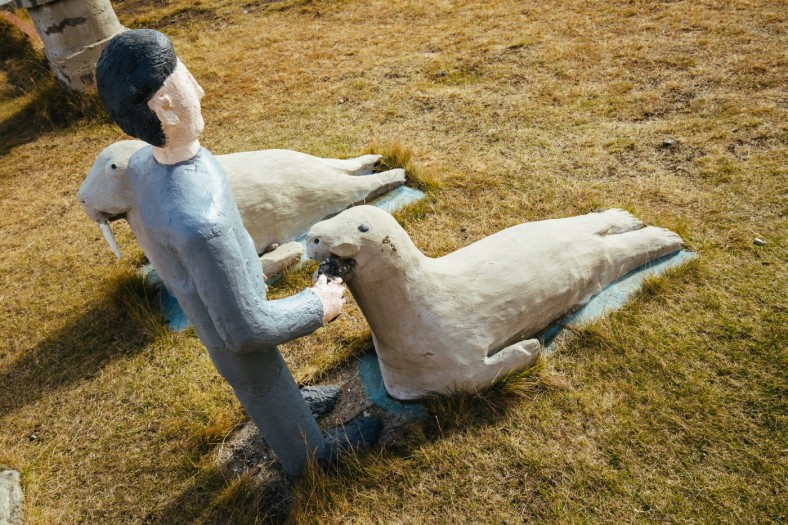 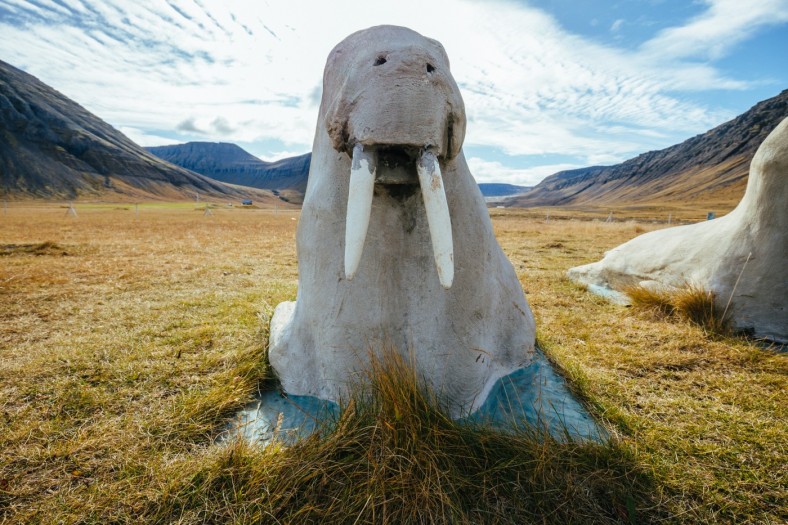 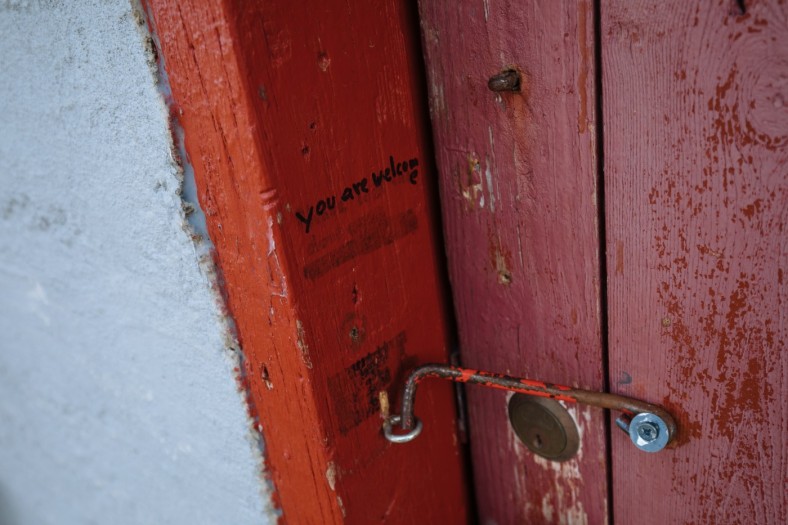 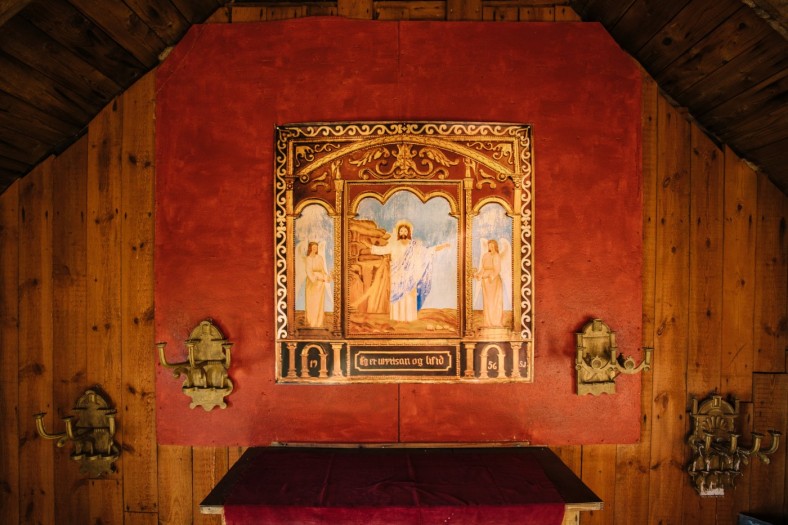 Living alone on his farmstead in the remote Westfjord area of Iceland, after Samúel Jónsson retired he finally had the opportunity to give expression to the artistic passion he had felt from the days of his youth.

In the early 1950s, around age seventy, Jónsson began transforming the area around his farm into an art environment, which ultimately included a number of concrete sculptures and two wooden buildings: a chapel and a museum.

His labors began with the creation of an altar that he wanted to donate to the local church; however, this gracious gesture was rejected because the church’s leadership believed the existing one would still meet the needs of the congregation. Therefore, in order to provide a place for his altar, Jónsson single-handedly built his own chapel, a rectangular building with side windows and a transverse construct in front, with the entrance topped with a small domed turret.

The second building on the site, the museum, is where Jónsson installed his paintings and smaller constructions, such as replicas of famous buildings. It is a wooden structure, painted in red and white colors; midway up the side is a balustrade supported by pillars, and along the long side is a fenced forward-mounted entrance, topped with a decorated bow.

In addition to these two buildings there is small collection of painted concrete sculptures that are scattered around the site. The masterpiece is a replica of the Lions Fountain in Spain’s Alhambra. Other sculptures depict animals such as seals, seahorses, and a duck with ducklings; there is also a sculpture of the famous Icelandic explorer Leif Eriksson.

Jónsson lived alone, and when he died (and was buried on-site) there was no one to take care of the artwork. Weather conditions in this part of Iceland do not favor site maintenance and stability if there is not constant vigilance and care. Too, preservation was made more difficult because the area had been facing depopulation; in 2010 the last farmer left the valley that once had fifteen farms. Fortunately, however, in 2004 an association was formed with the help of the Department of Agriculture, now owner of the lands, to begin the project to restore Europe's westernmost art environment. Every year, a group of volunteers under the auspices of the non-profit SEEDS (www.seeds.is) has been going to the site in order to help preserve Jónsson’s work. 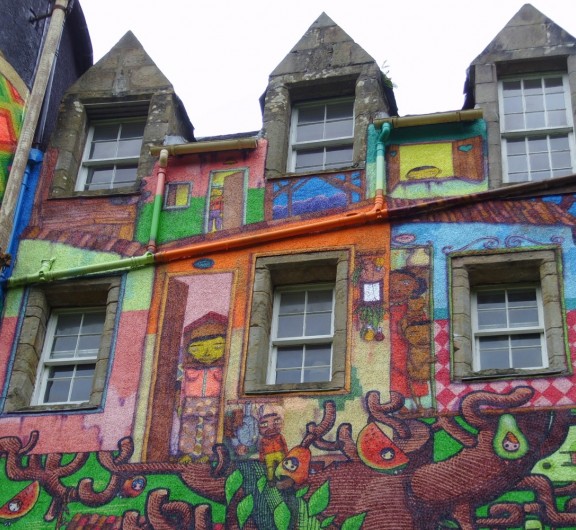 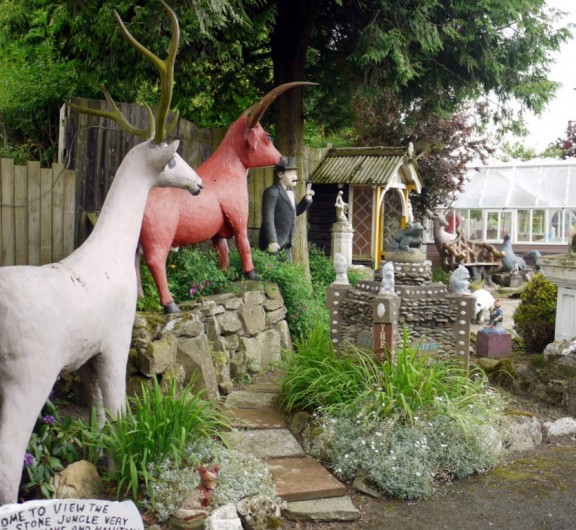 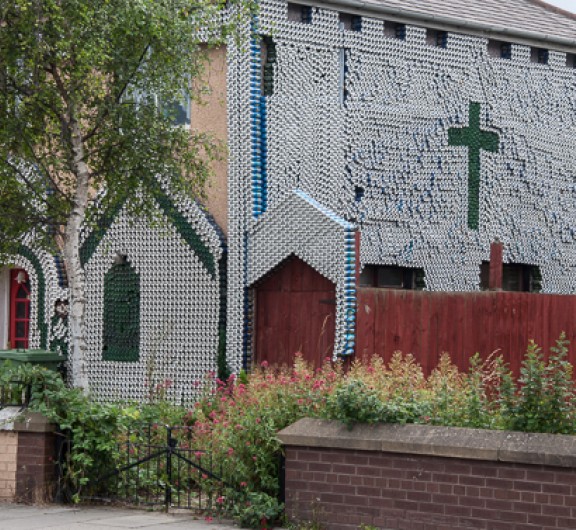 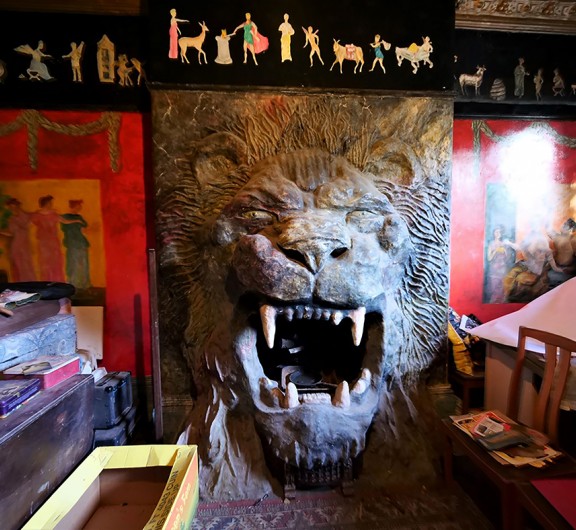 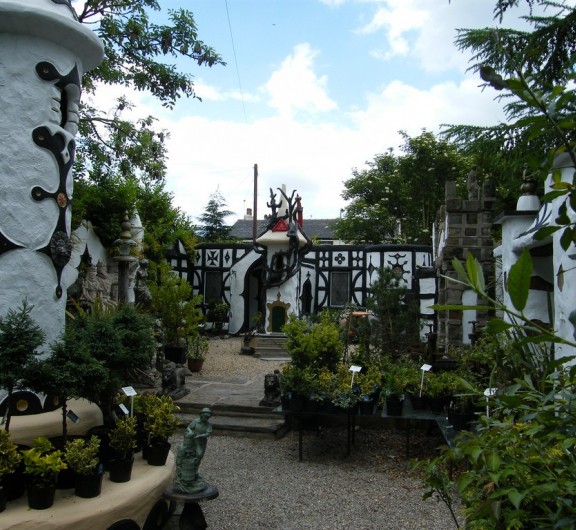