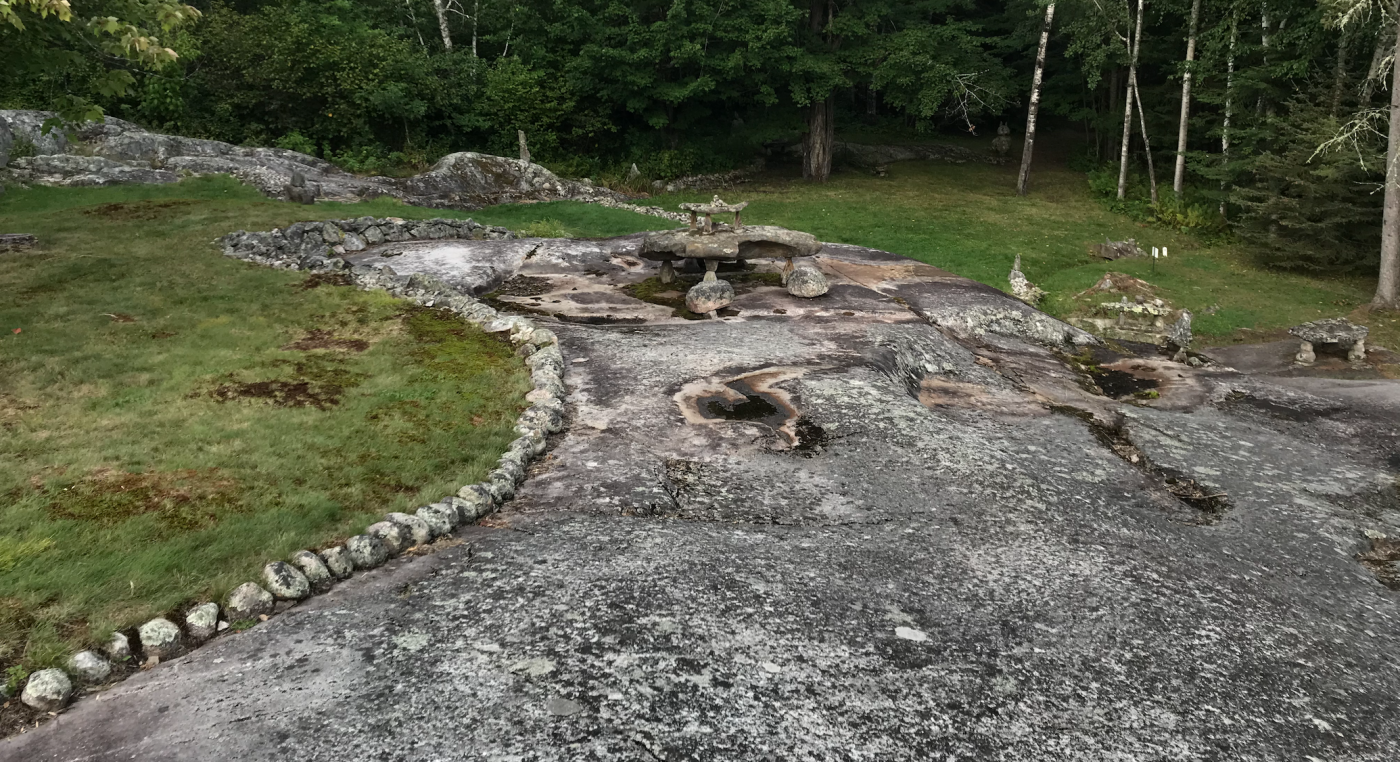 Part of the Ellsworth Rock Garden’s (ERG) allure is its unlikely setting in Minnesota’s Voyageurs National Park. The enormous waterway park is at the southern fringe of the northern boreal forest, consisting of islands and backcountry trails which connect Lakes Namakan, Rainy, and Kabetogama. The latter is the only Voyageurs lake that doesn’t share boundary waters with Canada and is the location of “the Showplace of Lake Kabetogama” as the ERG is locally known. Humans have long capitalized on the area’s natural resources such as the fur trade, logging, mining, and world-class fishing. We saw bald eagles everywhere while canoeing from campsite to campsite and had a few close encounters with black bears.

Then there’s the garden itself. Before Voyageurs was established in 1975, the area was a mixture of industry and private property, and the ERG site previously served both these uses. Jack Ellsworth and his wife Elsie purchased the property and lovingly labored on it between 1944 and 1965. The property had been a lumber camp, and deep grooves used for encampments still scar the garden’s sloping lawn, now softened by established grass. The National Park purchased the property in 1978. 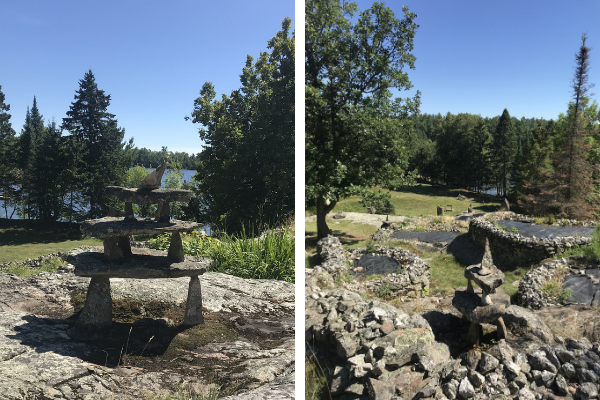 From this front lawn an eons-old granite outcropping rises 60 feet and dominates the garden’s topography. Jack Ellsworth created a series of dry stacked terraces for plants to punctuate the south-facing outcropping. The texture of these sinuous earthworks contrasts beautifully with the smooth and undulating glacier-carved granite. Ellsworth planted 13,000 lilies and an assortment of other flowers in beds that were once a glorious riot of orange. Unfortunately, few of his original plantings have survived the 55-year span, falling prey to long winters and a deer population that enjoys succulent perennials. 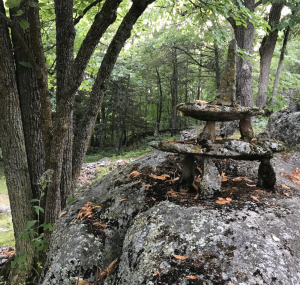 204 of Mr. Ellsworth’s sculptures remain, however – a staggering volume to the visitor. I felt like I was standing in one large, living artwork for the duration of my visit. A variety of forms with shared, common motifs beckon the garden-goer to explore a series of entrances and pathways up along the western edge of the outcropping to the summit garden and then down the eastern side. The sculptures are clothed in lichen which heightens their harmony with the other garden elements, the dense bordering forest, and the surrounding shimmering lake. The friction between three different time frames – the geologic scale of the rocks, the plant fluctuations on a diurnal/seasonal frame, and the human lens of historic preservation, were all in frequent communication during my day at the garden. 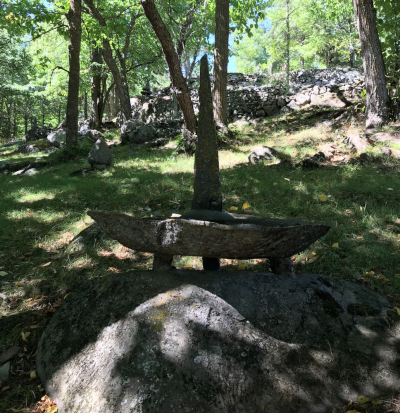 My favorite garden element trickles along the eastern slope. Ellsworth harnessed and enhanced the natural flow of rainwater into a progression of streams and pools; the deepest of the pools are planted with marsh-dwellers like cattails. In the shallower pools the granite is stained a darker grey and creates the feeling of water, even during a summer with little rainfall. The darkened rock serves as a backdrop for sculptures that live in vernal pools and rainfall basins. It’s clear that water plays a bigger role in the dynamism of the garden than summer visitors can appreciate. 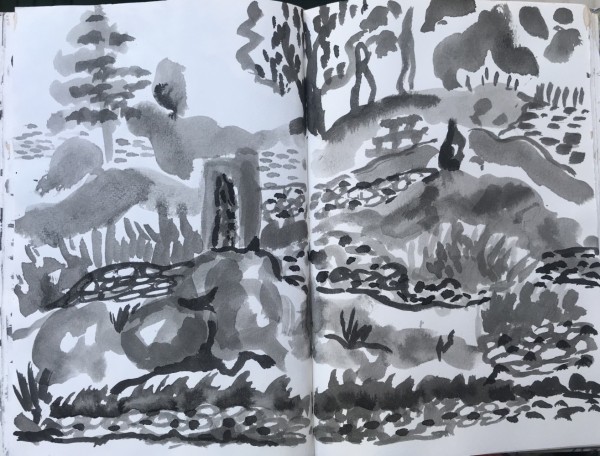 It’s amazing that only two decades of Ellsworth's labor yielded such an extensive and resilient garden. It is difficult to comprehend the amount of manual labor required to build retaining walls and stone sculptures all by hand on a remote peninsula in the wilderness. Did Ellsworth realize the garden would be his legacy? His career in Chicago as a fine woodworker remains a mystery, underscoring the invisibility of craftspeople in our built environments. Humans of the Anthropocene age are keenly aware of mortality, but on a geological timeline we are like insects, flimsy creatures flitting rapidly about during our short lifespans. Rocks, plants, and humans have different frequencies, and the Ellsworth Rock Garden is in fellowship with all three.

Special thanks to both Lisa Stone and Catherine Crawford for their extensive knowledge of the ERG. This trip was made possible by the Roads Scholarship for Research and Travel from the spring semester 2020 art history class Better Homes & Gardens: Vernacular Art Environments, at the School of the Art Institute of Chicago.

Cardenas is a current MA candidate in Arts Administration and Policy at the School of the Art Institute of Chicago: Fall 2019 to Spring 2021 and a curatorial assistant at the Roger Brown Study Collection.

All photos courtesy of Lydia Cardenas.