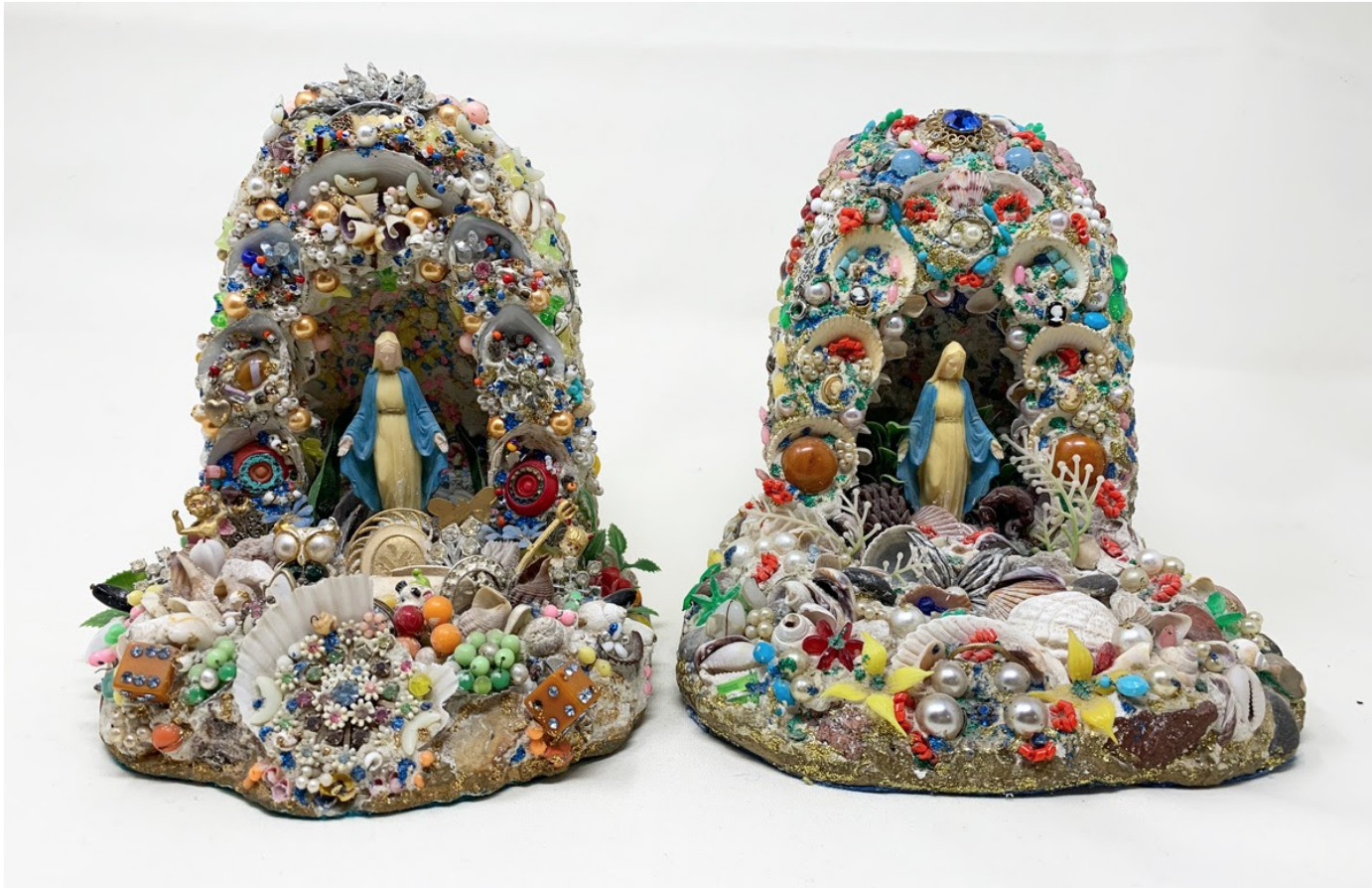 Several years ago, while living in Dubuque, Iowa, I stumbled upon a small and very beautiful handmade shrine, about a foot tall, in a Goodwill thrift store. This piece of art became one of my most treasured possessions, but I could not find any information about its origins.

I later formed a friendship with another avid thrifter living in Dubuque, Tracy Ternes, who owned a very similar shrine and was equally intrigued and mystified by it. Our mutual obsession with our shrines was the starting point of our enduring friendship. We soon realized that we knew a handful of other people in town who also owned one of these mysterious and beautiful shrines, but no one seemed to have any information about who made them. Every time I passed by a local thrift store, I hoped I’d find another one. And a few years later, one did show up at a local St. Vincent’s thrift store but was promptly thrown in the trash can by an employee. Luckily, my friend who worked there rescued it–now slightly damaged–and set it aside for me to scoop up. 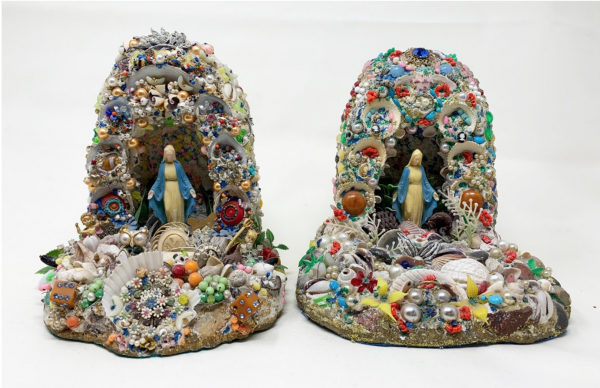 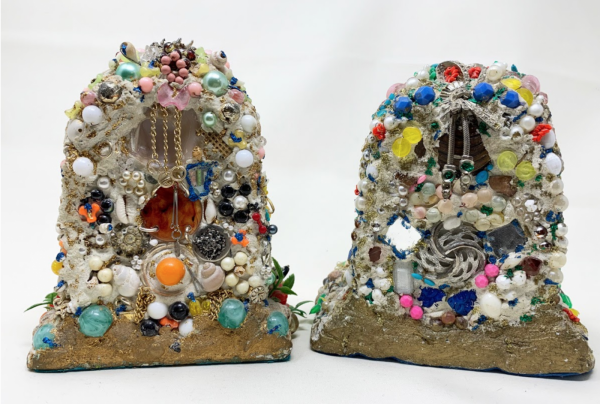 Catherine’s work has a few trademarks: the bottoms are lined with felt, she frequently painted the bottoms gold, and usually had jewelry dangling from the back top.

Fast forward a few years later to 2016 — I was driving east on highway 20 returning from an event where I was demonstrating how to turn bathtubs into cement-covered grottoes in Ames, Iowa. I had driven down this highway dozens of times before, but for the first time I spotted a rather large grotto in front of a farmhouse, not far off the highway. (Once you become interested in grottoes, you develop a magic power that enables you to see grottoes where you could not before! It’s truly amazing!) I made a U-turn to drive closer to the house and get a better look at the grotto. It was about 6 feet tall and absolutely gorgeous. No one was home, but I left a note in the mailbox and got a phone call a few days later from the owner of the house, Irv. He informed me that the grotto was created by his late aunt Catherine Bastian many years ago. 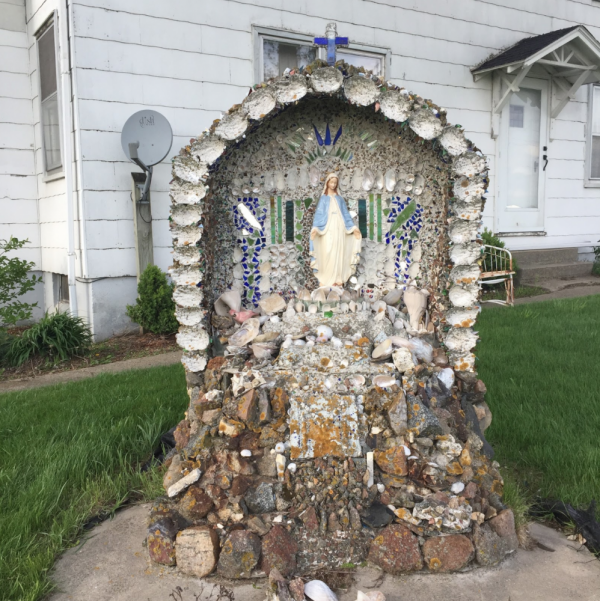 He got me in contact with Catherine’s niece, LaVonne, who lived a few minutes away and knew more about Catherine. LaVonne informed me that Catherine also created over 900 grottoes out of ham cans. NINE HUNDRED! I was blown away. I immediately realized that the small grottoes Tracy and I had must have been hers — they did seem like they were shaped like small ham cans! I told LaVonne that I thought my friend and I owned some of Catherine’s shrines, and Lavonne and Irv invited me to come back out there to see more of Catherine’s work and hear more about her life. The following photos were taken during the visit that day. LaVonne pulled out all of the shrines that she had inherited from Catherine, including pieces made out of much larger ham cans. 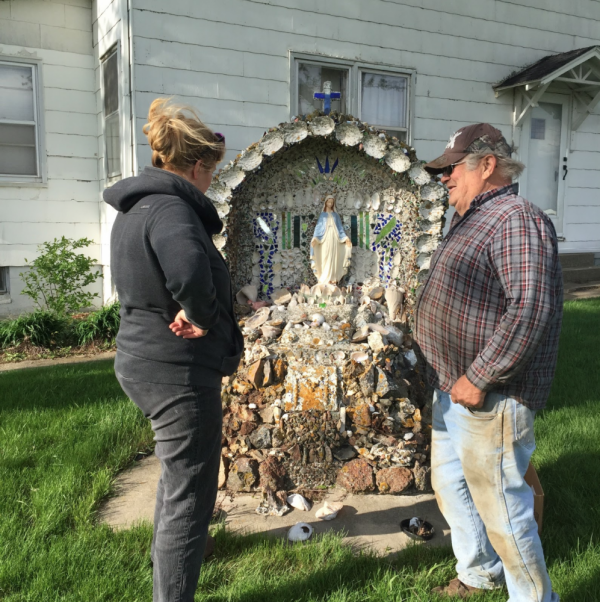 Tracy and Irv in front of Catherine’s first large grotto in Earlville, Iowa. 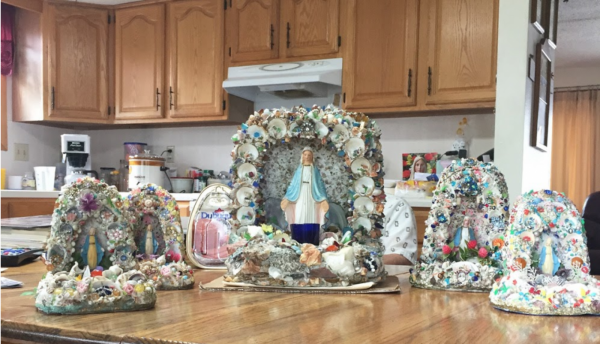 Lavonne and her husband had us over for hours sharing details about Catherine’s life and her devotion to making these beautiful shrines. It was an amazing visit and so satisfying to hear the personal story behind the mysterious shrines. I am sure Catherine was inspired by shrines that she saw in her lifetime, such as the nearby Dickeyville Grotto in Dickeyville, Wisconsin. In turn, Catherine’s work has inspired me to make shrines and sculptures in my own art practice.

I’ve included some photos below of some of the work I’ve done since discovering Catherine’s work. I started working with discarded cast-iron bathtubs and permanently installed a bathtub shrine behind a venue called The Smokestack in Dubuque, Iowa. 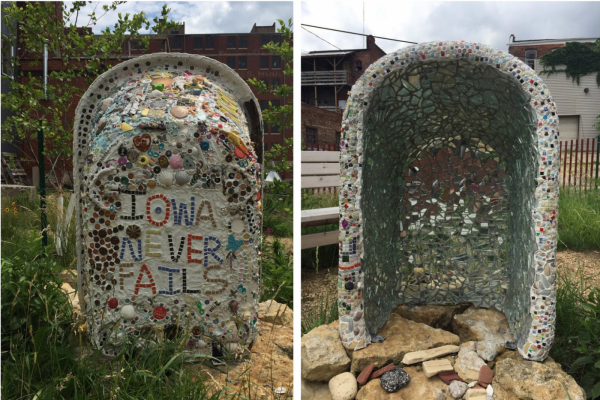 I also displayed some of my bathtub shrines works-in-progress during an art festival in Dubuque, Iowa. Here is a short video of me talking about Catherine and my work:  https://youtu.be/idbShlO7cQk

Working with cast iron is extremely challenging because of the weight —it is really only an ideal medium if you don’t need to move it after completing it! I learned the hard way. After this project, I started to work with styrofoam and fiberglass mesh to create a much lighter shrine shape and then mosaic on top of that. 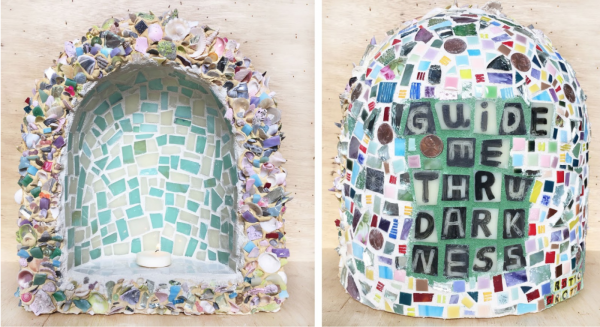 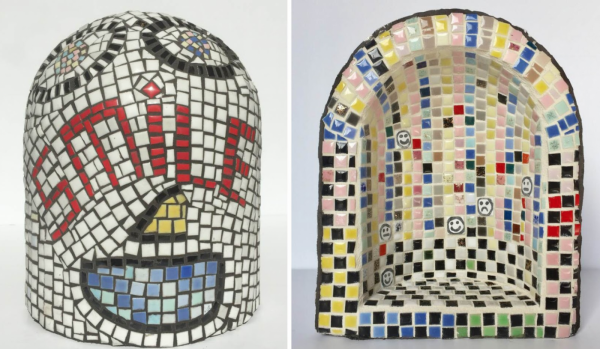 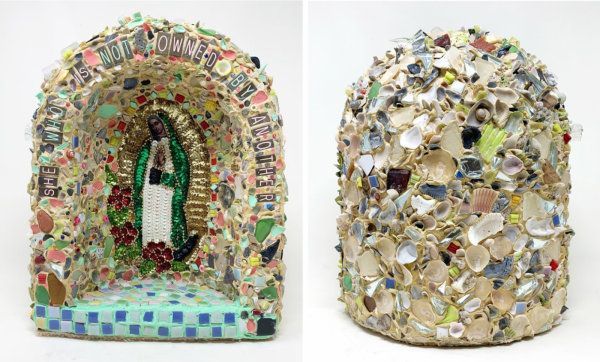 Some examples of shrines I made out of styrofoam and fiberglass with mosaic on top.

At the moment I have taken a break from working with fiberglass because it irritates my skin, so I have been working with glass bottles that I cover in mortar and then embed with shells, tiles, and pennies. 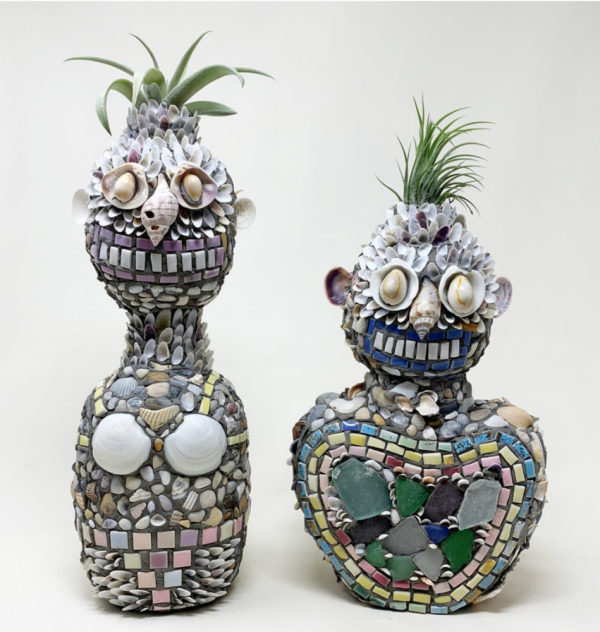 I find this process to be quite easy to learn and I love the spontaneity of working with found objects. I also teach workshops where participants can make their own “magic vessel.”  I plan on releasing a magic vessel “kit” in the fall so you can make your own magic vessel from the quarantined safety of your own home. 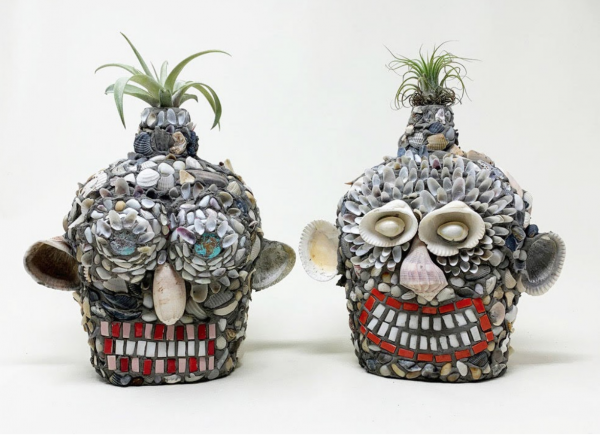 Here are a few examples of vessels that have been made in workshops. I love working with this method and am so excited to continue to share it with others. Thank you to Catherine and her family and all the grotto-makers before her for providing so much inspiration. 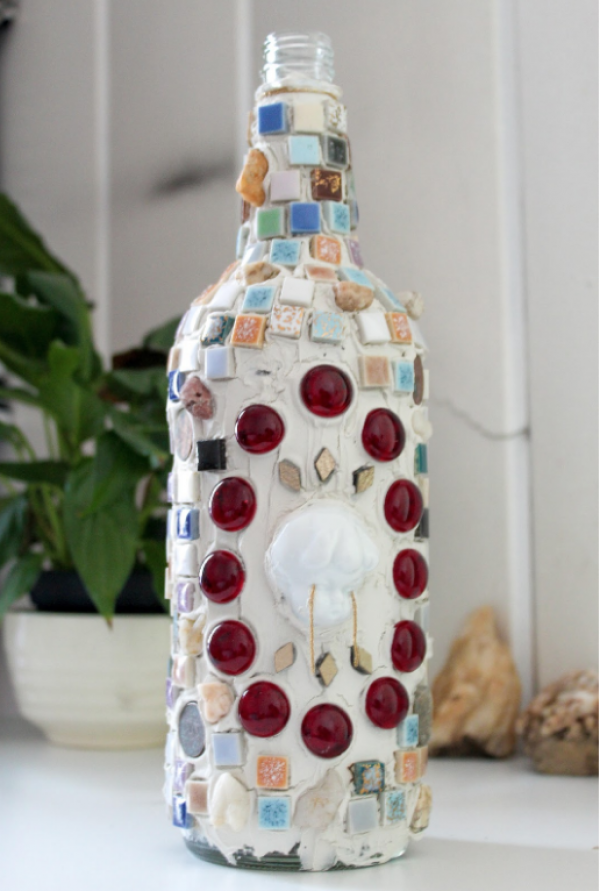 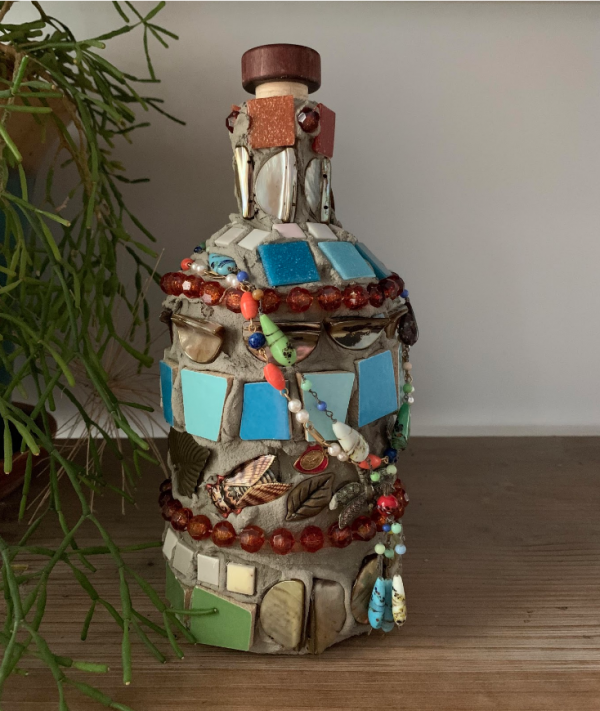 You can see more of Kacanda's work through her website: https://www.rottogrotto.com/