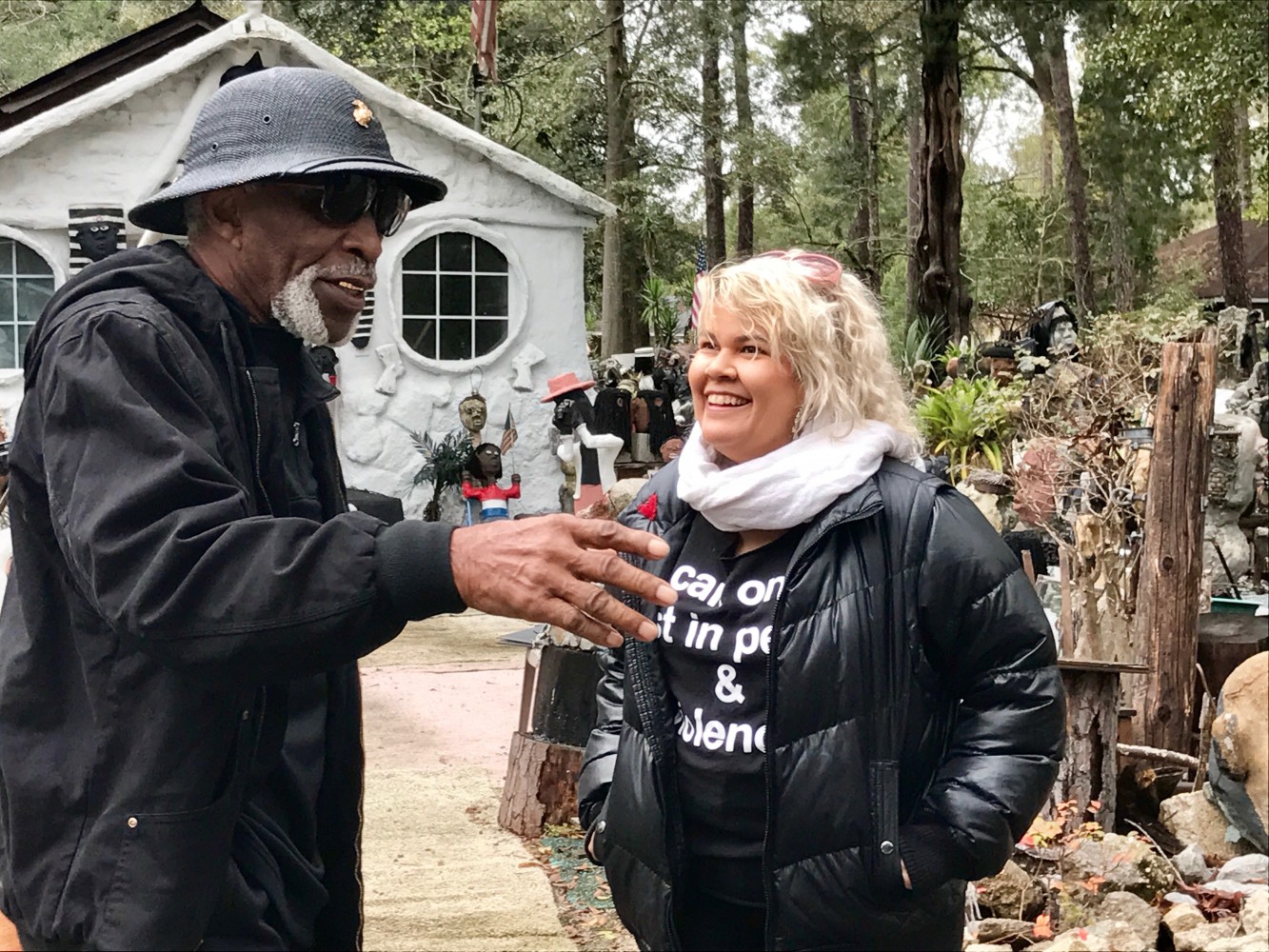 The entrance for the 2017 exhibition Things Are What We Encounter, could be seen down a long hallway-like gallery and, beyond, a line of Dr. Charles Smith’s sculptures on pedestals awaited your arrival. 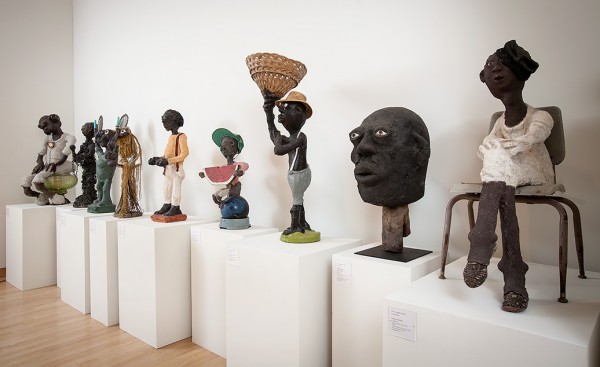 As you approached the sculptures and rounded a corner to the rest of the gallery, you were faced with what the children on school tours excitedly called the treehouse room—a wall of pine, stretching up and out, and as you turn yet another corner, wooden ramps, ladders, and glimpses of art come into view. Things are what we encounter. 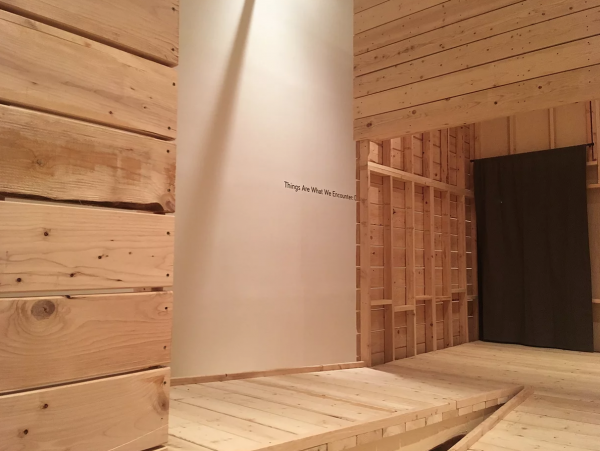 Contemporary artist Heather Hart creates in liminal spaces. Eastern Oracle (2012) at the Brooklyn Museum and recently, The Oracle of Conduction (2020) at the Albright-Knox Art Gallery in Buffalo, New York, are rooftops: a transition joining home and sky. She also creates porch installations: the space between the world and home. But her 2017 installation at the John Michael Kohler Arts Center (JMKAC) wasn’t quite that either. Rather, it was the transitional space connecting Dr. Charles Smith and the viewers, paired with the shift between the discovery that art environments offer and the structure that museums provide.

Heather Hart took a moment to share with us some reflections on meeting and working with Dr. Charles Smith and how it continues to influence her as time passes.

Since you've visited Dr. Smith and his environment, has his work influenced you in unexpected ways?

Of course. It’s this frustration with people like Dr. Charles Smith not really getting enough time to shine. There are so many underrepresented artists who work so hard and have such relevant things to say and show, and he’s got such amazing ideas. One of the things he’s been talking about is creating a south-to-north corridor on a highway and installing artworks all along that drive so that it’s a nod to the great migration but also an art tour people could do when they’re traveling. It’s a fantastic and really contemporary idea to bring his work outside of his art environment. People tend to think of his work as "outsider art," and I hate that term because it puts him in a category, makes him objectified in a certain way and dismisses a lot of the contemporary, cultural, and historical references that he’s very knowledgeable about in the same way that any contemporary artist is. He’s given me a lot of ideas, and I still want to collaborate with him and travel the show. If I had all of the time on my hands, I would just be a sponsor for his vision.

In general, Kohler (JMKAC) particularly has given me the opportunity to explore my practice in terms of thinking about structures and frameworks in which people navigate systems—so very literally thinking about architecture and architecture’s influence on the human body. That is mirrored in Dr. Smith’s art environment. Even though it’s his work installed, it really does force a body to navigate through that space in a narrative fashion, and I think that’s mirrored in the way that we move through cities. It’s definitely sparked a whole string of artworks that I’m interested in. In 2019 I got a Graham Foundation research grant and that project is very much tied to my experience with Dr. Smith, looking at spaces that hold inherent cultural history and the idea of thresholds in those spaces and quoting pieces of architecture that can be pulled out of context and thought about abstractly and psychologically.

Dr. Smith portrays a range of emotions in his work: joy, despair, and the whole spectrum in between. Are there any that really resonate with you and stick out in your mind?

Hope. He always has claimed that his work is meant for Black youth to learn about their own culture and that, in and of itself, is really hopeful. He’s constantly thinking about creative ways to be didactic and create a discursive space. It’s all really hopeful. It’s in the face of racism and bias that he’s lived through his life as a Black man and as a marine, it really saved him. He’ll tell you that his work saved his life, and I think that all folds into the idea of hope. He documents history and creeds and speculative history and there’s spiritual figures in his work, too. This idea of the monument or the statue or the relic or the oracle in some way really does describe his work because it’s constantly changing and evolving. Quite literally, he’s out there every day creating and painting. He is more prolific than any artist I’ve ever met.

I think that his work really reflects the multiplex nature of blackness—the fact that blackness is not a monolith, that there are all of these emotions and journeys and survivals and joys that a culture has been through, and he’s able to wrap that up both in subject matter and also in process.

When you met Dr. Smith in person, what surprised you the most?

I guess his tenacity maybe surprised me the most. I knew that he had made these spaces but I didn’t really understand that he’s out there all the time. You don’t necessarily make an appointment and go someplace to meet him, he will just always be in his installation, creating work. You can call him, but that’s where you’re going to find him, even if you don’t make an appointment. So that’s really impressive to me—quite a bar set.

What also surprised me, or maybe surprised is not the right word, but I guess impacted me is his really frank nature. So tearing the Band-Aid off and telling you things the way that they are for him. He has a ton of sage advice for a young artist, or even old or mid-career artist—thinking about his opinions about who I should be talking to, how I should be working the system, not just in the art world, but life in general. He’s really iconic and has this nature about him both in the way that he dresses, with the mirrored sunglasses, etcetera, that really forces you to face yourself when you’re talking to him. And then he’s going to talk to you about his experiences and your experiences about race. He was doing that way before it was popular to do so, so I definitely put respect on his candor. 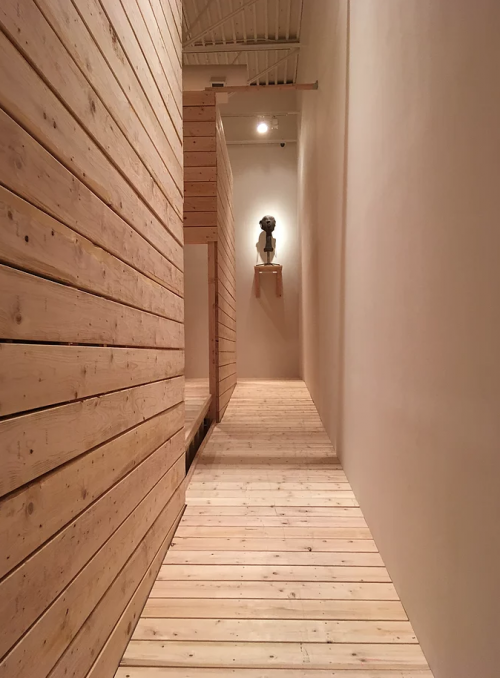 You mentioned in a response video from JMKAC that you wanted to evoke the feelings of being at Dr. Smith's environment. Can you specify what those feelings are?

You enter into this space and it feels all encompassing, maybe a little overwhelming, and you have so many choices over where to go, what path to take, and then he’ll guide you and narrativize the experience. You walk through pathways and you gain access and insight to his mind and to Black history, and I really wanted to slow folks down to think about the fact that this work is out of situation—it’s in the gallery in Sheboygan, Wisconsin—so what are you actually missing that you’d get if you were at the space with him? To slow down and pay attention to each individual work in that way and have that reverence. I wanted to think about all of those: the physical navigation and the narrative navigation that Dr. Smith gives in his environment and trying to embody that in my own language. 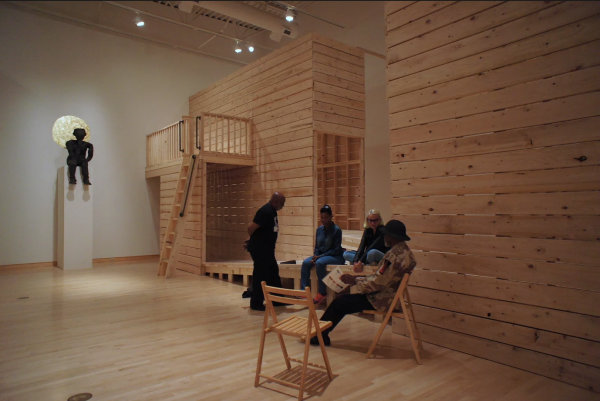 What else do you want people to know?

The biggest thing that frustrates me is that Dr. Smith and other artists like him, again, don’t get enough publicity, and I’m not sure if it’s that they’re not the "20 under 20" that are hot right now or they haven’t shown in The Met or been in the “right” galleries or collections or whatever, but he’s got a lot of local press and not enough national press. I was writing his Wikipedia page, and it was really a challenge. There’s barely enough material to create something to follow their standards of notability and that’s just a mirror of our systematic bias. I just want people to pay attention to marginalized artists and what kinds of wisdom they can bestow.

I think that Dr. Smith really needs a monograph; he needs resources to bring his work to a new level and that includes funds but also structure and publicity. Hopefully that’ll happen sooner rather than later. It’s too often that people are recognized after they pass away, so he’s hanging on because he’s needed, and I think he takes care of himself because he’s needed. I hope that people are able to consume the wisdom that he wants to share with everyone.

Slow down and pay attention; his work is conceptual and physical.

We'd like to offer our condolences to Dr. Charles Smith on the recent loss of Mary Golden, his partner of 43 years. To support Dr. Charles Smith in his continued efforts of art, activism, scholarship, and education, please visit his support page on GoFundMe.