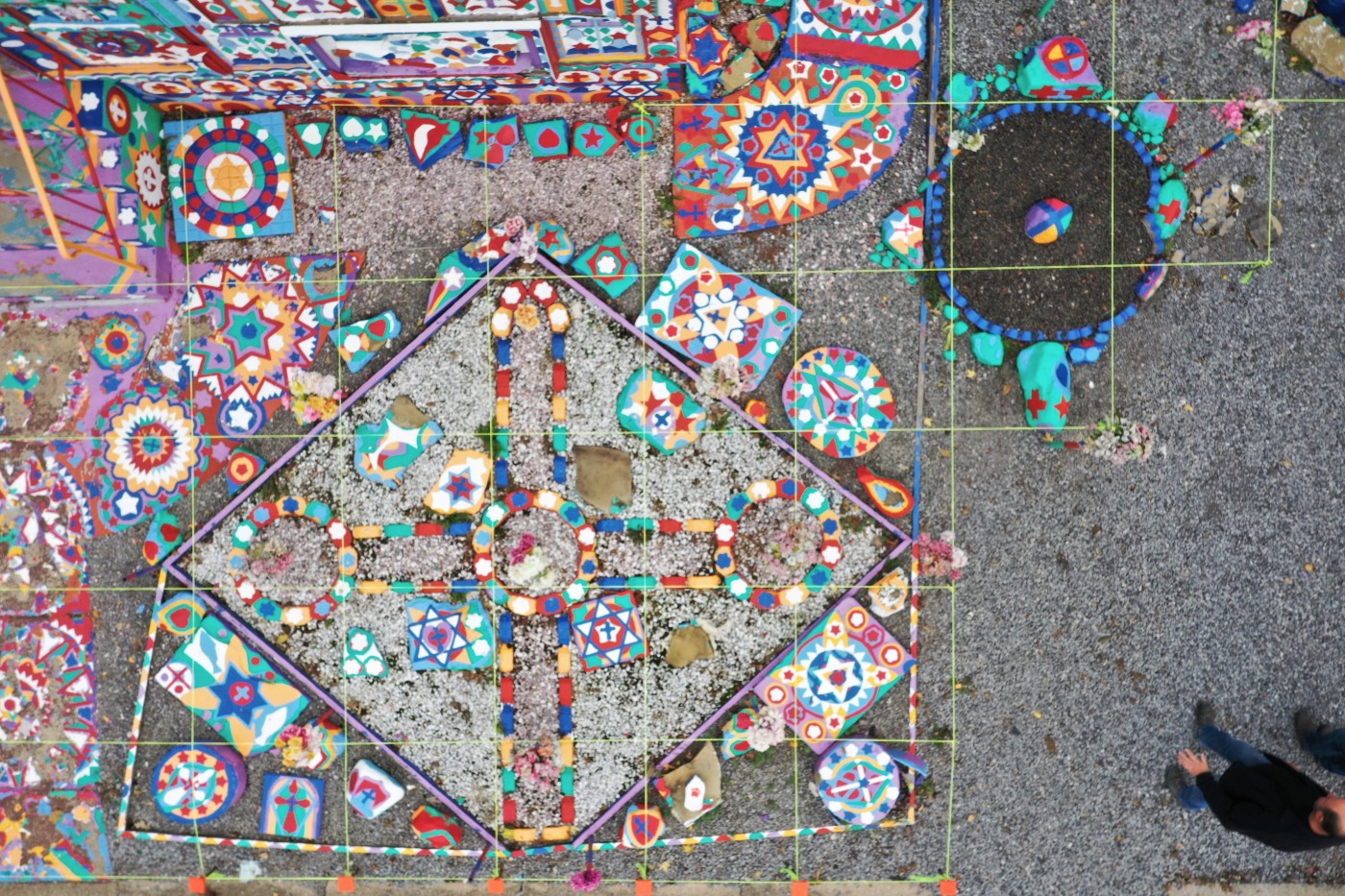 A big thank you to Ally Spongr of the Niagara Falls National Heritage Area for speaking with SPACES about their stewardship plans for Prophet Isaiah’s Second Coming House, a current preservation project of the Kohler Foundation. This week, we present Part II of our focus on the future of the Second Coming House by getting a behind-the-scenes look on the ongoing conservation work of the Prophet’s artwork by the Pennsylvania-based firm B.R. Howard. (To catch up on Part I, click here.)

We spoke with Braeden Howard, Head Project Manager and an Assistant Conservator for B.R. Howard (BRH). He has over 15 years of hands-on treatment experience in a wide variety of conservation projects. Braeden is a Professional Associate of the American Institute for Conservation. He’s also received training and certifications in industrial coatings inspections, Jahn restoration mortars, mold remediation, and has managed large disaster recovery projects. Thank you, Braeden, for sharing the preservation process of the Second Coming House with SPACES. 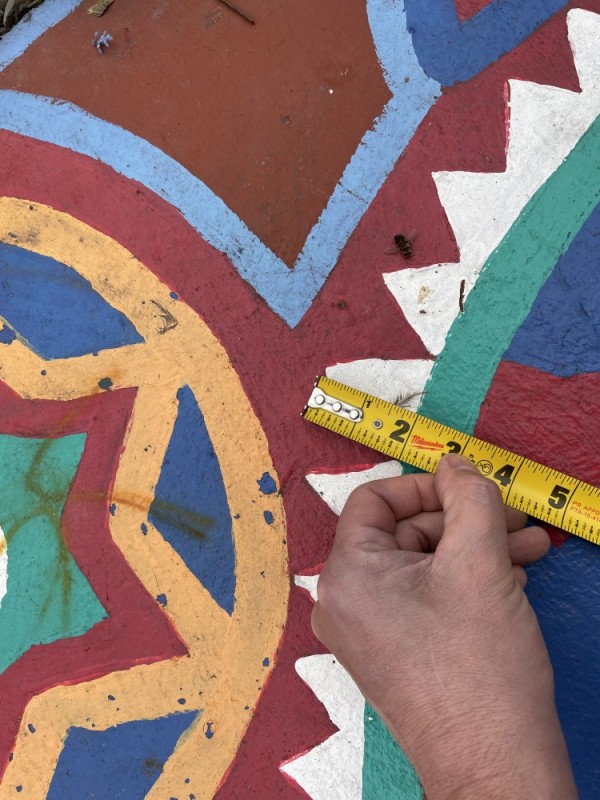 Tell us about the preservation of Prophet Isaiah’s Second Coming House. What are the major goals?

B.R. Howard was initially hired to perform an overall condition assessment of the exterior of the Second Coming House and the associated artwork surrounding it. We then provided a proposal outlining treatment approaches that would be the most advantageous for how the site would be utilized moving forward.

Much of the artwork that was located behind the altar fence and cross had already fallen over and was stacked beneath tarps in the rear of the property. The remaining artwork contained large areas of cubical brown rot and insect damage (presumed to be termites). The cross was structurally unstable, and we were concerned that sections would fall over the winter months. Many of the decorative artwork elements that had been constructed from plywood were badly delaminating. A lot of Robertson’s artwork seemed to either evolve and change over the years and was repainted as he maintained it. The many accumulated layers of paint were actively flaking off. We knew that if we tried to conserve these problematic materials, it would be incredibly costly and would ultimately fail relatively quickly and result in more of the art being lost forever. 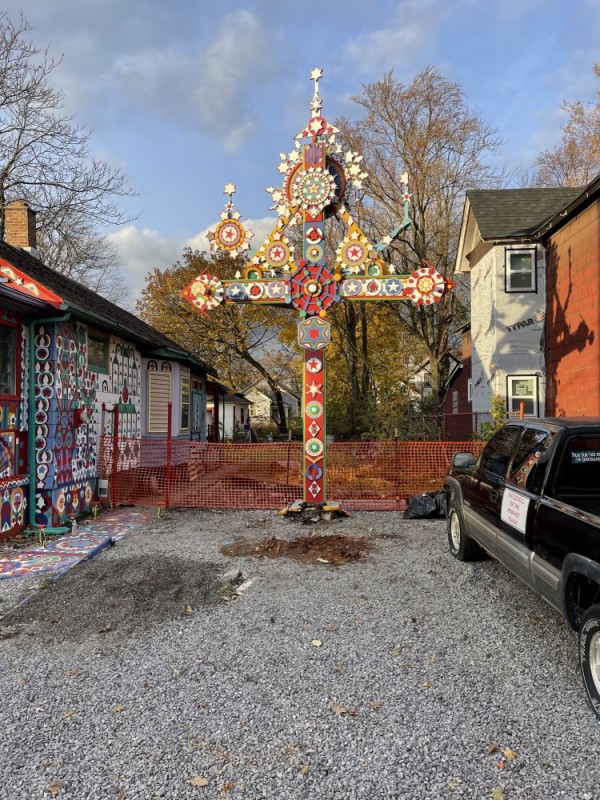 One of the overall cross condition photos taken by B.R. Howard. 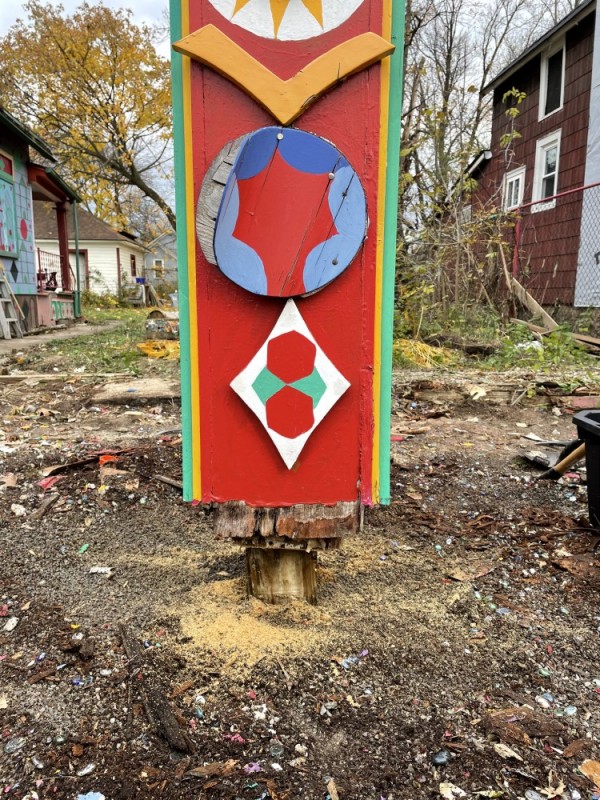 A better look at some of the delamination in a condition photo taken by B.R. Howard. 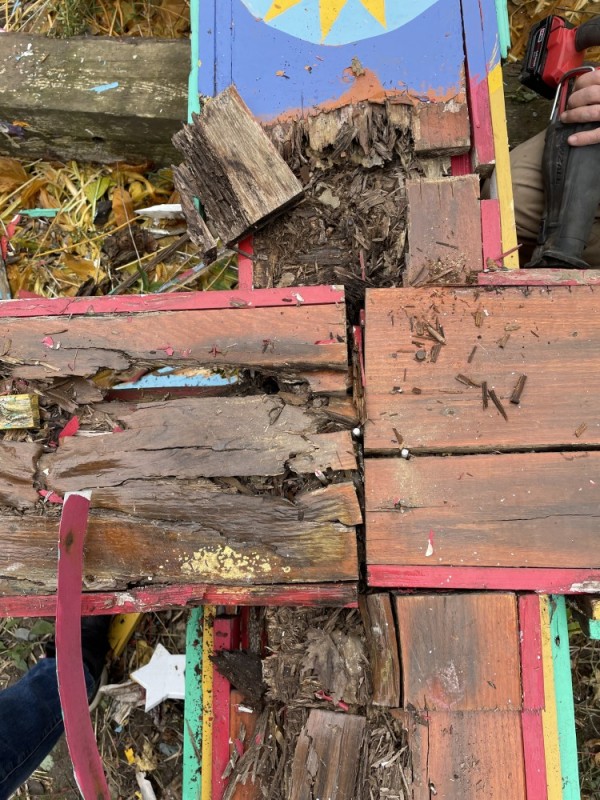 Some of the most extensive rot on the cross in a condition photo by B.R. Howard.

Ultimately, the BRH team felt that we could accurately replicate the badly deteriorating artwork from durable composite materials that would not deteriorate and still have the same desired aesthetic produced by Robertson. The best solution for ensuring the preservation of the artwork in its current state meant removing it and storing it in a climate-controlled environment to prevent continued deterioration. We may explore trying to incorporate some of the original elements that are in good condition into the replicated parts if at all possible. We do know that the site needs to capture as much of the original feel and appearance as possible, not be a source of ongoing frustration and expense due to maintenance, and ensure that the elements are structurally sound as to ensure the safety of the community. The original cross and some of the other materials will likely be displayed within a museum environment. This means that more traditional conservation methods can be used to treat and stabilize these pieces.

We planned to partially disassemble the cross before lifting it and laying it down using heavy equipment. However, due to the severity of rot we encountered during inspection, it had to be cut into a few sections. Every area we wanted to use as a pick-point or for choke strap location (a location on a piece that one might use to move) began to crumble as we added pressure. It simply became a safety concern, and we didn’t want anyone getting injured if sections began to fall off as it was lowered. We will be able to conserve and reassemble these sections during the conservation treatment. The areas of rot will need to be removed after additional disassembly once consolidation is performed. These areas and the cut joints can be filled and supports added without visually altering the original aesthetic. 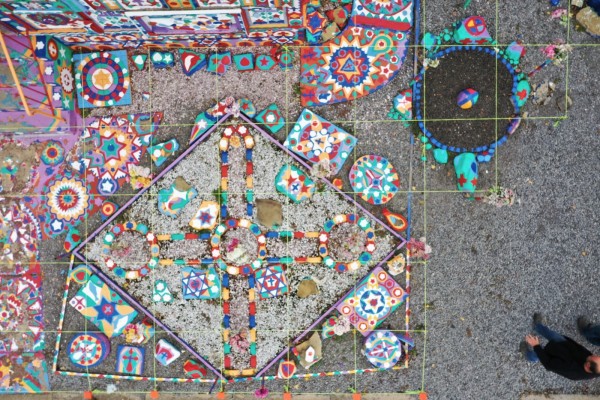 An aerial shot of the site taken by B.R. Howard. 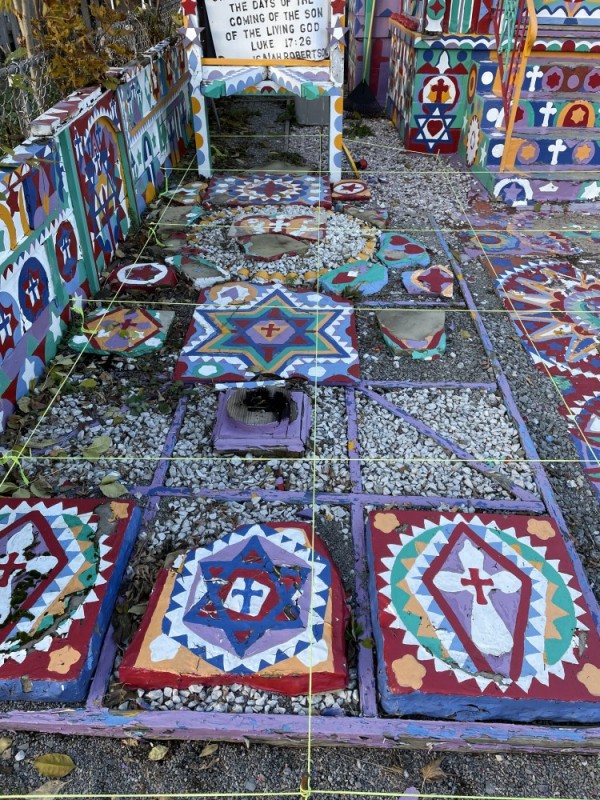 Creating a grid helps the conservation team know exactly where components are intended to be.

As of now, our team has thoroughly documented all of the art on site using both high resolution photography and aerial imagery. We created a series of gridlines to map the exact location of the artwork and materials before the artwork was removed, packed, and transported to our facility.  We have inventoried, tagged, and photographed all the material. The altar platform and altar fence have been positioned in a similar fashion as they were found at the Second Coming House. The other materials are safely on pallets and racking. Measurements have been gathered on all the various elements and some stencils are being constructed for the painted artwork, large round and rectangular signs, sidewalk, altar, and fencing to ensure everything is reproduced accurately and has the same look as Robertson’s. The stars, bells, and small crosses will have to be hand cut as opposed to water-jetted or they would all be identical and have a factory appearance. We’ve had a long delay on obtaining our dimensional composite lumber materials. We’ve also been in contact with photographer Fred Scruton, who has extensively photo documented the Second Coming House over many years. He sent a hard drive with all of his photos and video, and we were able to print out a whole binder of 18” x 24” pictures to use as references during the reconstruction. This has been especially helpful as we hadn’t seen the areas that had fallen over before we performed our initial assessment.

Accurate reconstruction with the same appearance. Further discussions and understanding the future display of the original material and cross in order to develop an appropriate conservation treatment. 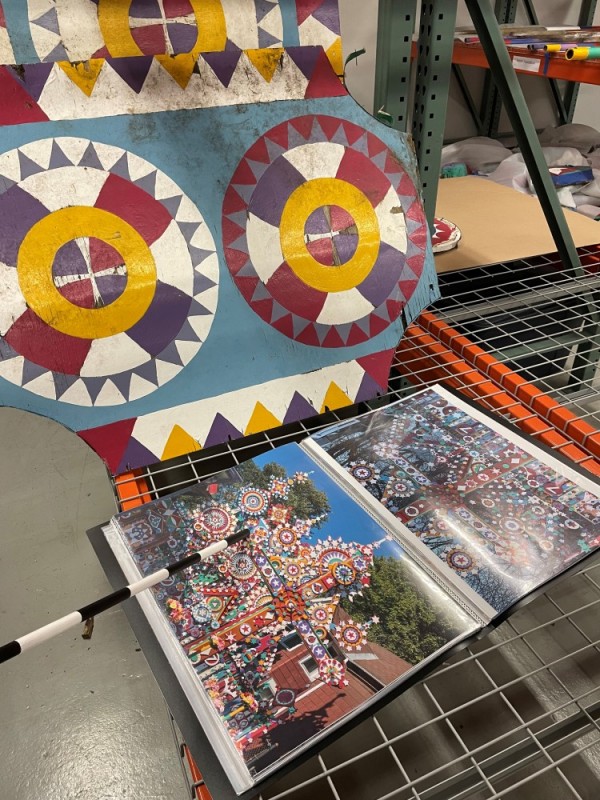 Having high quality documentation, like the photos taken by Fred Scruton, helps the conservation process immensely.

How does this project compare with your typical preservation work? What are the biggest challenges?

BRH’s team of conservators quickly realized the very unique challenges and the importance of finding a balanced approach between traditional conservation treatment methodology, site functionality, and the need for ongoing maintenance. Finding materials, methods, and solutions to balance all these factors was probably the biggest hurdle. We have had the opportunity to work on a very diverse range of art, cultural artifacts, industrial artifacts, and architectural projects over the years. Our conservators, conservation technicians, and craftsmen have differing areas of specialization, so while this project is unique and presents a challenge; we feel very confident that we can achieve an end result that will match Robertson’s original creation. 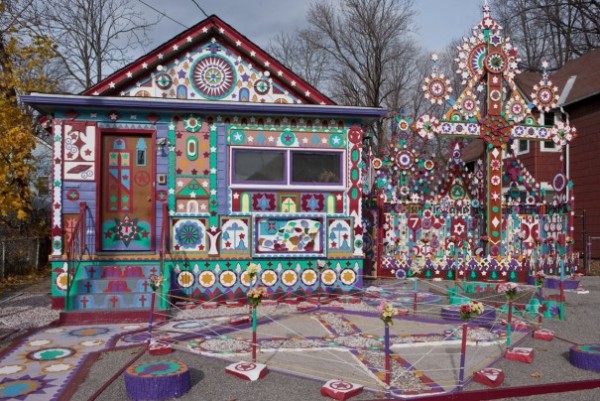 Braeden Howard was interviewed by Jen Balge via email for SPACES in February 2022. The interview has been edited for length and clarity.