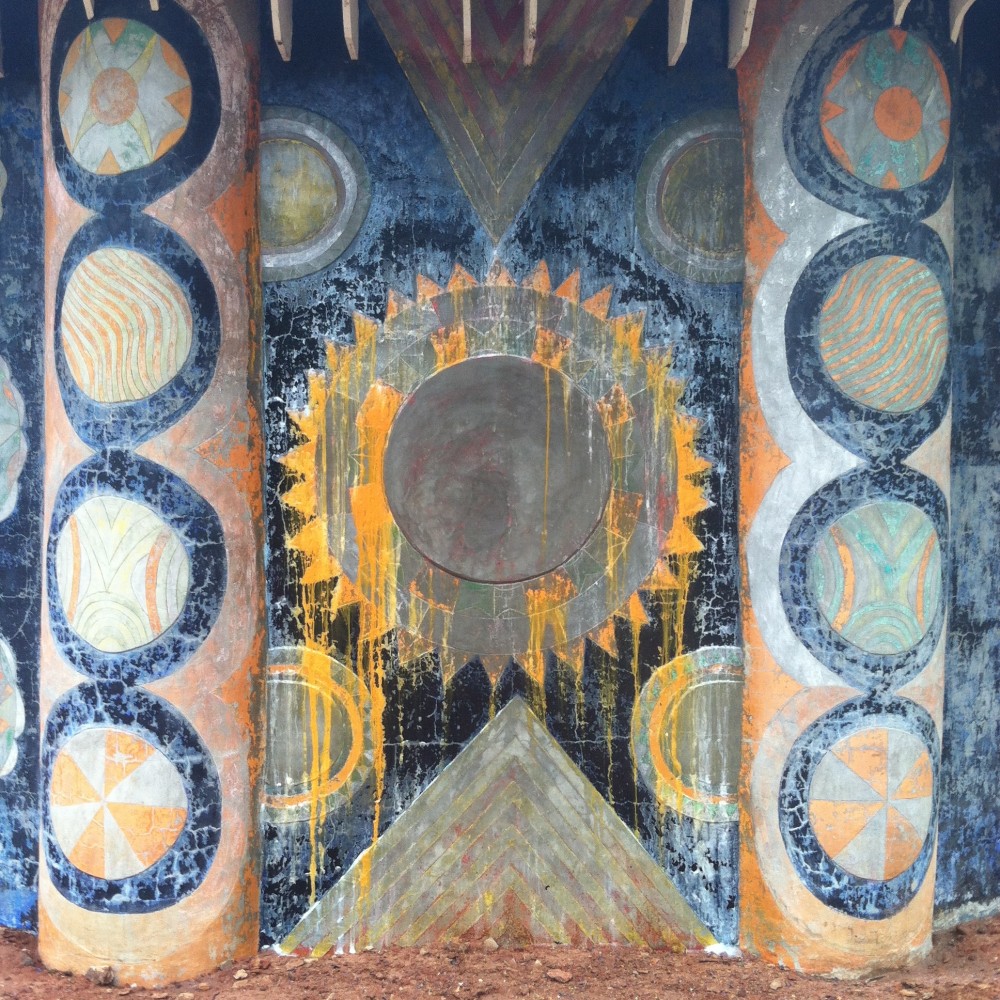 Charles Fowler is the caretaker at Pasaquan, the art environment created by Eddie Owens Martin (aka St. EOM) from 1957 to 1986 in Buena Vista, Georgia. He first began working at the site in 2016 as a preservation intern for the Kohler Foundation. For the past four years, he has been an employee of Columbus State University (the steward organization of Pasaquan) and Chair of the Special Events Committee for the Pasaquan Preservation Society.

We thank Charles for sharing with SPACES about St. EOM, his work at Pasaquan, and how his time at the site has affected his own studio practice. 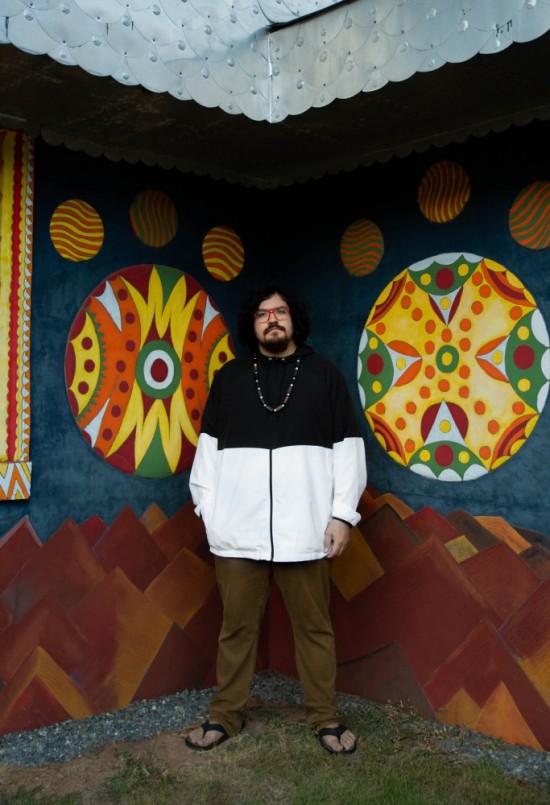 Portrait of Charles Fowler at Pasaquan by Berkley Martin Lynn, 2019.

After being accepted as an intern with Kohler Foundation, I had a crash course in all things Pasaquan and St. EOM–mostly from those who had experiences with Eddie Owens Martin. Living in Columbus, Georgia (a forty minute drive from Pasaquan), I would hear stories and rumors from people about their experiences with Pasaquan–like headless dogs that roam at night, bodies buried in the ceremonial sandpit, or how Pasaquan is haunted by Eddie’s ghost. At the time, hearing all the superstitious rumors affected the way I saw Pasaquan and St. EOM. Today, I still hear stories about St. EOM that lean toward the supernatural, for example, the accuracy of his fortune-telling, how he would know people’s names before they told him, or anecdotes from folks that made pilgrimages from around the world to meet St. EOM, believing in his powers. Even to his day, some come to Pasaquan seeking something—be it healing, a spiritual journey, meditation, etc. On occasion, St. EOM was called “The Poor Man's Psychiatrist;” people would come to talk to him about their troubles and ask for advice. I’ve been approached by visitors that read about St. EOM’s life and would open up to me regarding their families. This has been my life for six years: meeting people from all over the world and witnessing the emotional impact St. EOM’s legacy continues to have. 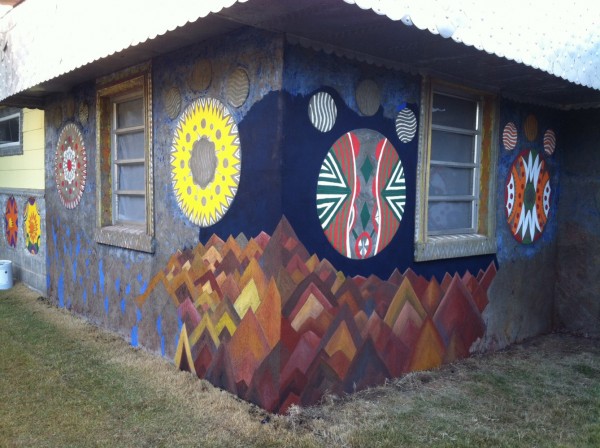 A painted wall in the middle of preservation at Pasaquan, 2015.

When it comes to St. EOM’s impact on me, I feel small compared to him. I watch over his masterpiece and make sure people know about his life as an artist and how he lived on his own terms. My art is more reactive; I react with materials available to me. During my Kohler internship, we stripped all the paint off the walls, exposing the cement underneath. Before the internship, I was making sculptures with mostly found objects and using bright fluorescent paints. I didn’t realize it at the time, but I began taking away color from my own work. I was trying to reset artistically and didn’t want Eddie to influence me, or at least not be obvious that he was. I started to think about Eddie’s focus on Pasaquan, the world he was creating, and how he envisioned his world. So I started to draw the tiniest circles in geometric forms or planes. This was my meditation, and I was hoping it would conjure something (not sure what), but as I continued, things started to take shape from this repetitive act. My hands are moving automatically within each plane I fill up–creating forms that seem to be creating depth or creating mass.

Left: Degrading paint at Pasaquan at the beginning stages of preservation. Right: The repainted and preserved Pasaquan.

In 2018, I was asked to do a one-month Kohler Arts/Industry residency by then-Senior Curator of the John Michael Kohler Arts Center Karen Patterson to assist Saya Woolfalk for her exhibition. I was allowed to make my own work in between assisting with Saya’s work. To be able to make my own art, I was in the Kohler factory from 11:00 a.m. to  4:00 a.m. almost every day that month. In thinking about how I got there, I concluded that it mostly had to do with St. EOM. I started to think about my time as the groundskeeper, the internship restoring Pasaquan, all the people I met that were impacted by Pasaquan, the Pasaquan Preservation Society, St. EOM’s employees, volunteers, and the town that was fearful but positively impacted through the presence of Pasaquan. Eddie Owens Martin was the source.

I found a mold of hands I could use. I wanted to cast my own hand, but I had to use the existing molds to save time. I cast several hands touching a ball in a circle formation with drawn, glazed lines rippling from the center onto the hands. The ripples represent energy being transferred from the source–St. EOM. Ever since I got back from the residency, I have been obsessed with a “source,” and I’m still trying to make sense of it. Because Eddie was the source, I ended up naming my arrangement of hands “Transference of Energy.” That idea is present in my pieces–a void, an energy, whatever you can tap into and manifest something from within.

My role as the groundskeeper is to maintain the site. I open the gates, give tours, package artwork, run social media, repair damages, and cut the grass. As the Chair of the Special Events Committee, my crew and I put together events with Columbus State University to get people interested in Pasaquan. We put together a festival called Pasafest, featuring bands ranging from blues and folk to psychedelic rock. There is also an artist market with folk artists from different parts of the United States. Due to the pandemic, we unfortunately had to cancel our 2020 Pasafest and, instead, we are releasing a vinyl record featuring musicians and artists including Lonnie Holley, Jim White, James Husband, Crispin Wah, and many more, in partnership with Institute 193. I have a song on the vinyl as the Exotic Bird Hunter. Fowler means a hunter of birds, and the word “exotic” came from learning that St. EOM loved calling things “exotic,” so I am referencing myself and St. EOM. 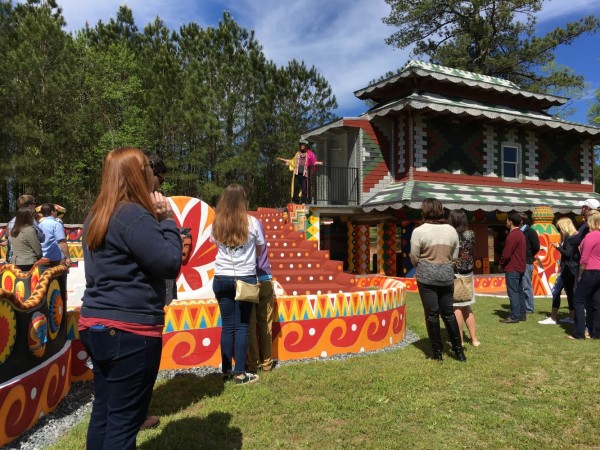 A lot of what we are able to get done at Pasaquan wouldn’t happen without the Director of Pasaquan, Michael McFalls. Without his leadership, we wouldn’t be able to pull off such grand projects. I would also like to recognize Columbus State University Foundation for supporting Pasaquan and Annie Moye, the Chair of the Pasaquan Preservation Society, for leading us through our projects. 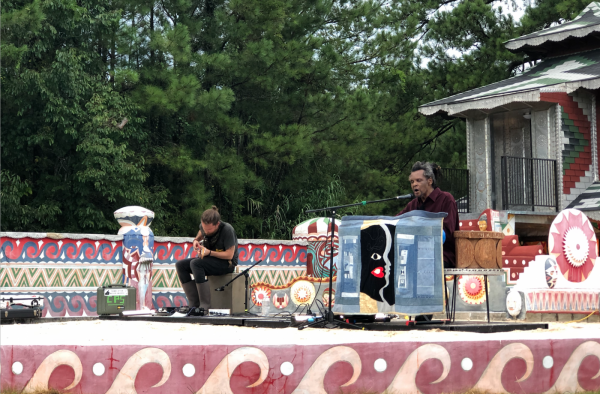 Lonnie Holley performing at Pasaquan in 2020 for the upcoming release of "A Circle of Atoms: The Pasaquan Sessions."

I’m also interested in the work of other environment builders, like Dr. Evermor’s Forevertron near Madison, Wisconsin. The scale of the Forevertron is awe-inspiring. I also like Joe Minter’s African Village in America located in Birmingham, Alabama. After meeting Joe Minter a couple of times, he leaves a strong impression and makes you want to create and be a better person. Vollis Simpson’s Whirligig Park in Wilson, North Carolina is fun. I really like the multi-colored cups spinning in the sky when his sculptures begin to move in the wind. Since I have been working seven days a week for four years, it’s hard to travel to art environments I want to visit, but after discovering Leonard Knight’s Salvation Mountain parodied in Grand Theft Auto V, I like to visit the fake Salvation Mountain and pretend I am there. The real Salvation Mountain is definitely at the top of my list.

The mentioned vinyl record “A Circle of Atoms: The Pasaquan Sessions” was fully funded on Kickstarter and will be available for purchase on the Institute 193 website.

Pasaquan is closed for the month of July. Regular hours resume in August: Friday through Sunday, 10:00 a.m. to 5:00 p.m.