A Look Inside the Towers: Conservation in Watts with LACMA 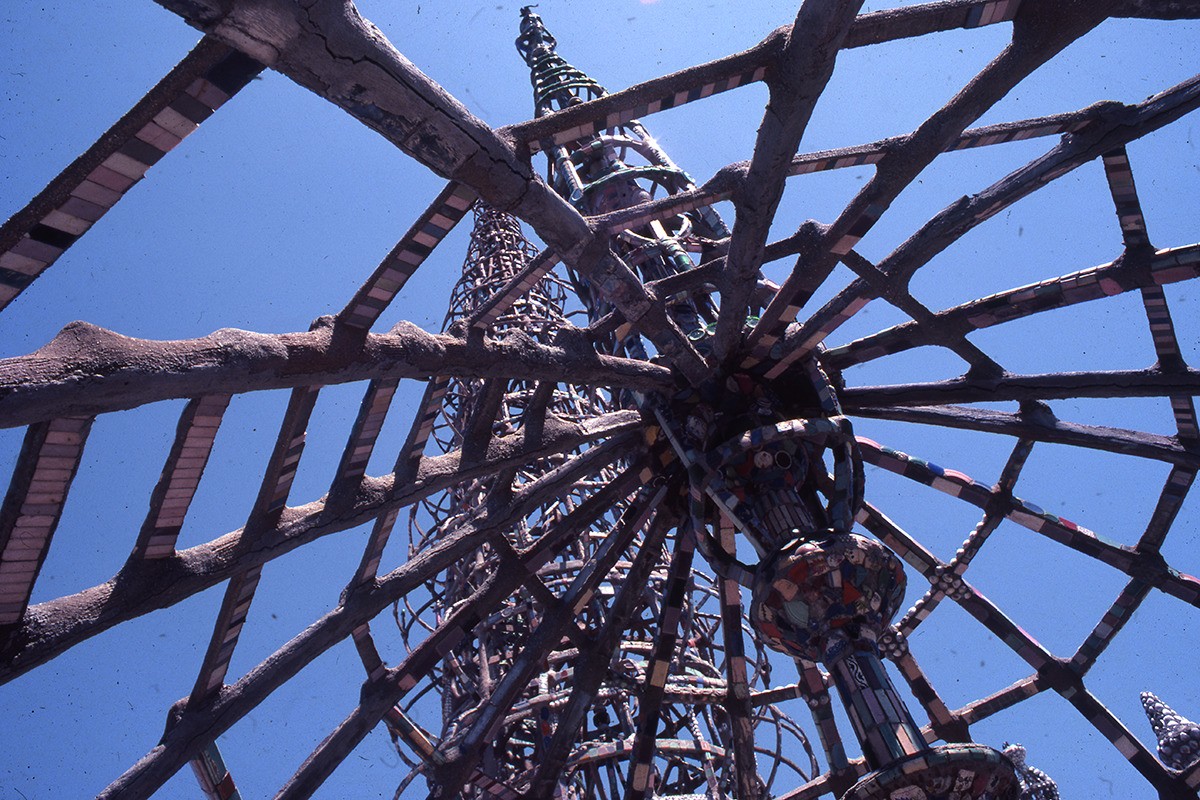 Built from 1921 to 1954 by Italian immigrant Sabato (Simon) Rodia, the Watts Towers are made of concrete, bottles, cups, glass, tile, shells, and steel. After nearly 100 years, the art environment has experienced numerous rounds of conservation – the most recent and ambitious by the Los Angeles County Museum of Art (LACMA) with the City of Los Angeles’ Department of Cultural Affairs. This project is a crucial effort to manage day-to-day maintenance and develop a comprehensive plan for the long-term preservation of the Towers. We're excited to share some insights from Lily Doan, Associate Conservator at LACMA about the ongoing project! 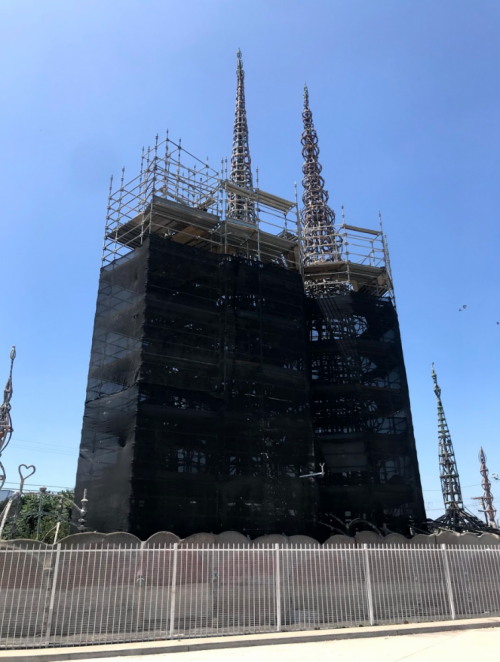 Tell us about the current conservation project at Watts. What are the major goals?

The current conservation project at Watts Towers of Simon Rodia is a partnership between the Department of Cultural Affairs, City of Los Angeles, and the Los Angeles County Museum of Art (LACMA). The partnership began in 2011, when LACMA spent six years organizing conservation archives, creating a database and protocols to document the site, and evaluating potential conservation materials and methods. Additionally, LACMA also took on a contract to complete general maintenance of the site.

Starting in 2017, LACMA undertook a three year project to conserve the three tall towers, which are colloquially referred to as the West Tower, Central Tower, and East Tower. The goals of this current phase of the project includes:

What are your thoughts on the relevance of the Towers to the cultural identity of Los Angeles?

As a person of color who was born and raised in Southern California, I am honored to help preserve a local monument that is iconic of LA. During this time of social change, when #BlackLivesMatter protests honor the streets of over 900 cities in America, the fields of cultural heritage, museums, and the arts are also facing scrutiny over issues of diversity and inequity. I think that Watts Towers, and especially the Watts Towers Art Center, exemplifies how an arts institution can operate with a focus on benefiting the community it serves, rather than an institution or system designed to elevate and maintain the wealthy and elite.

The Towers’ location within a residential neighborhood allows for community members to feel a personal connection with the monument that I find particularly striking. I am often approached by community members who grew up in Watts and make it a point to visit the monument with younger family members. They clearly feel a deep connection with the Towers and want to teach the next generation about the iconic monument, because it symbolizes pride in their community. This is also an objective of the Watts Towers Art Center, through the educational programs geared towards supporting youth in the local community as well as the many tours given to school groups from throughout Southern California.

I also interact with tourists from other parts of America as well as from abroad. In my opinion, a trip to Los Angeles is incomplete without a visit to Watts Towers. It is important to understand that LA is more than just beaches, Rodeo Drive, and the entertainment industry. It is a city that also belongs to people of color who are often marginalized in our society. I think it is particularly important to acknowledge that black and brown people play an incredibly important role in shaping the cultural identity of LA.

Has the project presented any surprises or major obstacles? Have you learned anything interesting about Rodia and his practice that you didn't know before?

I think the biggest surprise has been the amount of armature repair we have to contend with in the current campaign. The original treatment plan was focused on the concrete, but once work began, it became apparent that there is substantial damage to the armature. Charles Dickson, artist in residence at the Watts Towers Art Center and our contract welder, is now a normal fixture on our team.

I am always learning something new about Rodia and the site. The Towers are like a time capsule of materials and ephemera from both Rodia’s time and the last several decades of conservation work. Each day is a discovery of items such as vintage glass from railroad lights or hardware that was commonly used in construction during decades past. Furthermore, the complexity of the site makes it difficult to fully understand what we are looking at. On multiple occasions, the conservators can discuss at length whether a particular area is original or restoration, and the truth is, without extensive previous documentation, it is impossible to verify our assessment. This is often the case with many things related to Rodia, whose life and work is poorly documented. Research into one question about Rodia’s life will often lead to many more questions rather than definite answers.

Has there been community support of / response to this project? What has that looked like?

One of the most unique characteristics of the Towers is its location in a residential neighborhood – the site is literally surrounded by homes. Conservation work on a site such as this requires the use of scaffolding and rather loud power tools. I imagine that our immediate neighbors enjoy our presence as much as anyone would enjoy listening to construction noise for three years.

The Towers are often visited by tourists as well as members of the community who are generally interested and appreciative of our efforts, though understandably disappointed that entry into the site for tours has been restricted due to safety issues (since the monument is now a construction site). In general, I think the community is quite eager for the project’s completion so that tours can resume, allowing for a more intimate experience with their beloved monument. 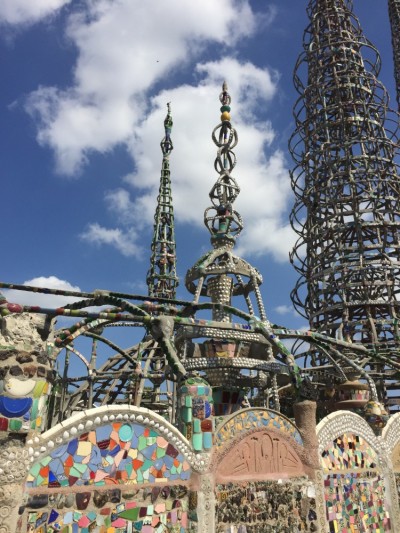 What does the future of the Watts Towers look like?

The future of Watt’s Towers is in the hands of the rather complex partnership between the State of California, the City of Los Angeles, and the Committee for Simon Rodia’s Towers in Watts. The next few years may signal a transition in stewardship of the site, as terms of leases and contracts are renegotiated.

LACMA’s contract with the City of Los Angeles comes to an end in late 2020, upon completion of the current treatment campaign. We will submit recommendations for continued maintenance, which is crucial for long-term preservation of the site. Our hope, our goal, is that our work will help preserve Watts Towers for the enjoyment of generations to come.

Ultimately, I hope that resources are allocated to continue education programming as well as maintenance and conservation of the site, since Watts Towers contributes so much to the cultural identity of the local community and the greater Los Angeles area.